4 months. That’s how long I lasted before I succumbed to wanderlust again. I want … no, I need … to hit the road again; with my panniers loaded up on my trusty Surly; seeing new things with each pedal stroke, making new friends on the road, revelling in the cheers of kids egging me on, eating strange new foods, imbibing unfamiliar beverages … and as always, going out daily on a wing and a prayer. Woo hoo!

The destination is a little closer to home this time — the infamous Mae Hong Son loop in the northern Thai region of Chiang Mai — a stupendous 600km route boasting some 1,824 bends, many of which are 180 degree switchbacks. The terrain? Well, like most mountainous rides, it’s either up or down, and apparently, in many places quite severe in its aspects … just what I need to while away a week.

Yes, it's that rustic...and these pachyderms may just overtake us on the steepest climbs of the route (photo stolen from my friend Cheah's blog)

This time, 2 very willing accomplices are joining me — Shang Leong and Terence Law, first-timers no less. Shang has even gone so far as to order a brand new Surly (and new Ortlieb panniers) to kick-start his touring career. I am impressed.

Did I mention 600km in a week? Well, I doubt if we’ll be able to ride all 600km of it; it’s more like riding the 300+km to Mae Hong Son and then hire a pickup truck and drive/bike the rest of the route back to Chiang Mai. But we’ll see how it unfolds … 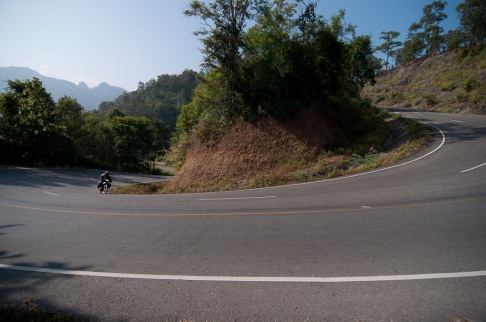 So why this place? Well, besides the fact that it’s there, my fellow adventure cyclist friends Alvin, Chris Wee and Cheah have all been there and done that, so I guess I’ll have to do it too. A good excuse as any, I guess 🙂

But … the likelier truth is that it’s pretty unlikely I could get away for a month again like I did last year pedalling around northern Europe; work and wife-wise, that is. So, I’ll just have to make it short and sweet. On the brighter side, I could probably squeeze in another mini-tour somewhere sometime before the year is out — it’s all in the cards, and the possibilities are endless … woo hoo indeed!