The van came earlier than expected, so I had to rush through my breakfast while the driver waited, a bit impatiently. Sally Kham and her mother were the dutiful hosts and sent me on my way with warm goodbyes. I shall miss the both of them. They’ve made my short stay here a really enjoyable one.

My bike was unceremoniously loaded onto the roof of the van and strapped down. The van was already full, and I was ushered into the back row, sandwiched in between 2 Tibetans. The entire van was actually filled with Tibetans, all 12 of them, including the driver. But, as is common in Asia, squeezing in a couple more passengers won’t hurt, and this the driver did — stopping in the town to pile on another 2 passengers. Now we totalled 14, of whom 4 were monks.

All ready for the 97km drive to Kangding

This is what a full load of 14 talkative Tibetans in a van looks like. 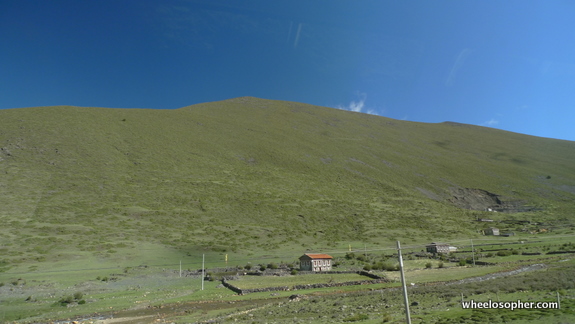 Out of Tagong, blue skies framed against green hills, mostly occupied by farms.

As the elevation increased, the temperature started dipping... 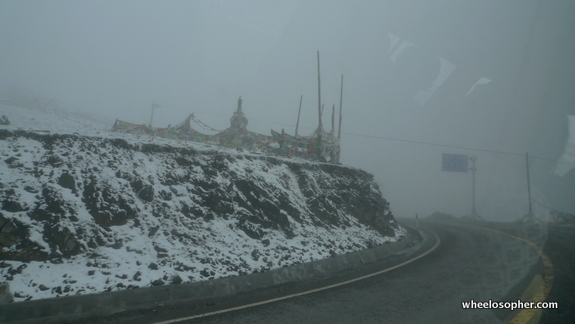 At the top of the pass. Cloud-covered and very cold.

Obviously there were others who didn't share my views on riding up a cold, steep mountain. I could only look on in envy.

After Xinduqiao, the smooth road ended, and for almost 2 kms, it was a slow bumpy ride. The road was climbing steeper and steeper now, and we were moving into the clouds. Sally’s mom was telling the truth about the conditions here. As we neared the pass, there was more and more snow on the hillsides. We were also moving into the clouds, and visibility was starting to deteriorate. I’m very sure I would not have enjoyed riding up this section. It was definitely colder and windier than Balangshan. But, surprise surprise… there were others more gungho than me – Chinese cycle tourers coming from the direction of Kangding, undoubtedly heading for Lhasa.

I was all praise for them. It’s a very, very tough ride heading west, and very slow going, too. After the pass, it was all downhill, all the way to Kangding. The Chinese-ness was very apparent as well. It was also very cold. Due to its location, the wind blows through it all year round. Kangding is worth spending a couple of days to explore its surroundings. It’s quite a pretty town, with a fast river rushing through it. At the local market, the van disgorged all its passengers. It was time to ride – all the way downhill, or so it would seem (doesn’t it always?) After just 2 kms out of town, I had to stop and layer up on more clothing. It was cold. 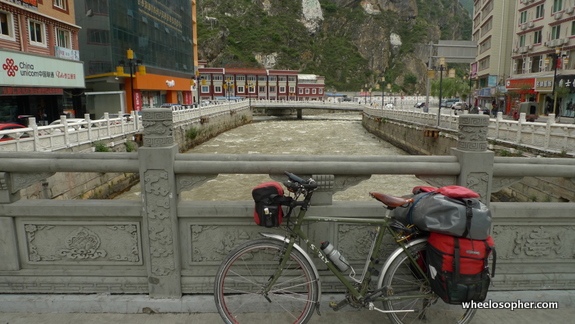 Thw town of Kangding, with a river flowing right through it. The wind seemed to blow constantly through this town 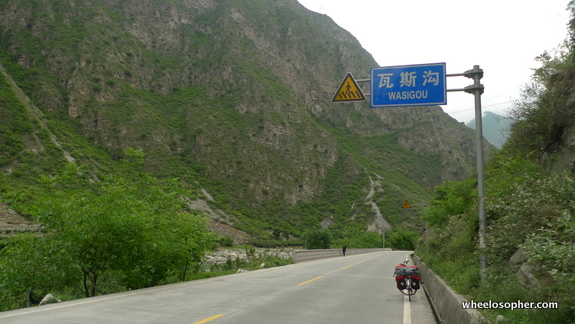 Fascinated by these fruits that I had never seen before, I stopped to buy some from these camera-shy ladies. It was cheap, delicious and freshly plucked from the orchards behind them. This fruit was everywhere. 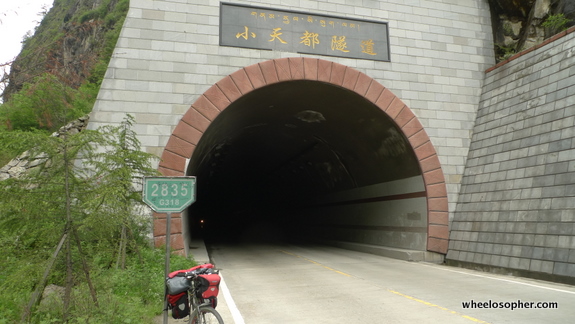 I lost count of the number of tunnels that I rode through. It can be unnerving when a large truck passes you by while you're at the halfway point. 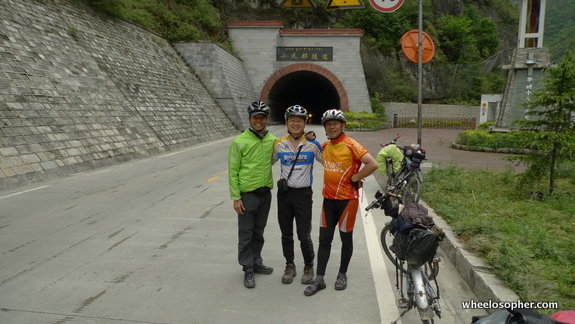 As I exited the tunnel, I came upon 3 Chinese tourers headed for Lhasa (don't they all?). They seemed a little underpacked. They were also all smokers, which is as common as bicycles in this country.

As I suspected, it wasn’t going to smooth downhill all the way. 12 kms from Luding, the road turned bad — I was riding through what would be the bottom of a dam when fully completed. I didn’t know it then but it was rough riding all the way to just outside the town of Luding.

Although it was mostly flat elevation, it was slow going, and it wasn’t made any better by the amount of dust stirred up into the air by fast moving traffic. I’m quite sure I breathed in more than enough dust to last me a lifetime. 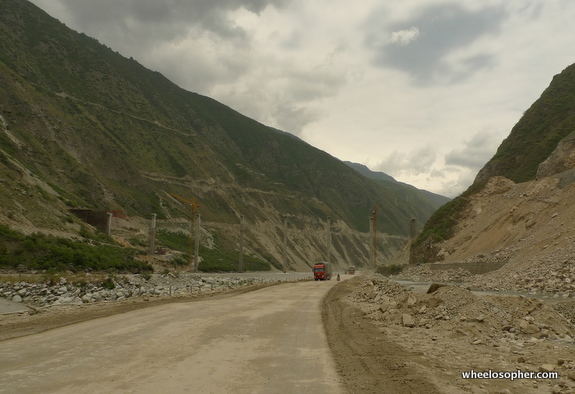 This was going to be a huge dam. I'm riding through what would eventually be the bottom of the dam itself.

Halfway through, traffic came to a standstill. No cars were coming from the other side either. The line of stuck traffic snaked all the way to as far as the eye can see. It looked bad but… bicycle rules! I merely squeezed my way in between the cars and rode for quite a while and came to a … landslide. A bulldozer was in the midst of clearing the debris and across the mound of rocks and earth an equally long line of useless vehicles stood waiting.

I felt so smug knowing that I was going to be on my way in a jiffy. As I carried my panniers across the obstacle, 2 other Chinese cycle-tourers were doing the same thing. We looked at each other as we crossed paths and just grinned knowingly. It was crazy dusty, thanks to the bulldozer and I could only risk a quick photo as I crossed over to the other side carrying my bike. The motorists could only stare at me glumly. They must have been there for quite a while. 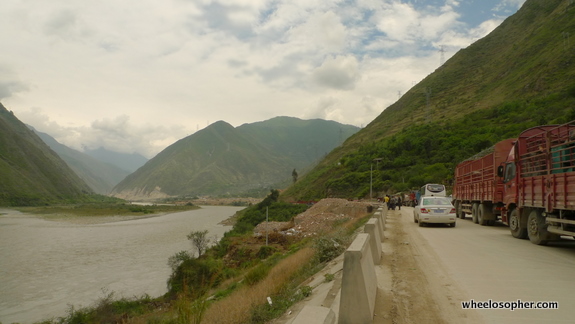 The line of traffic going nowhere stretched all the way to as far the road can be seen.

Cars suck, yeh! Hapless motorists waiting in the sun for the bulldozer to finish clearing.

The town of Luding, located on the wide and fast flowing Dadu River. 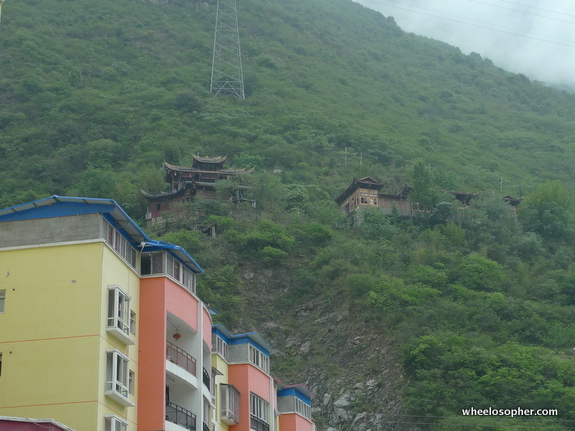 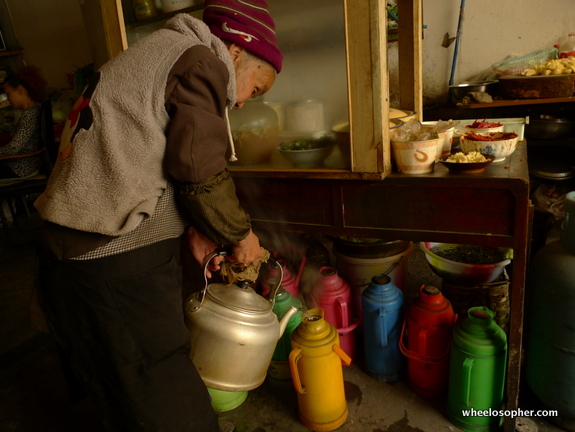 My first meal in Luding was at a small mother-and-son shop. Not more than 5 ft in height, she's nearly bent doubled over. For many Chinese, life goes on despite their hardships. 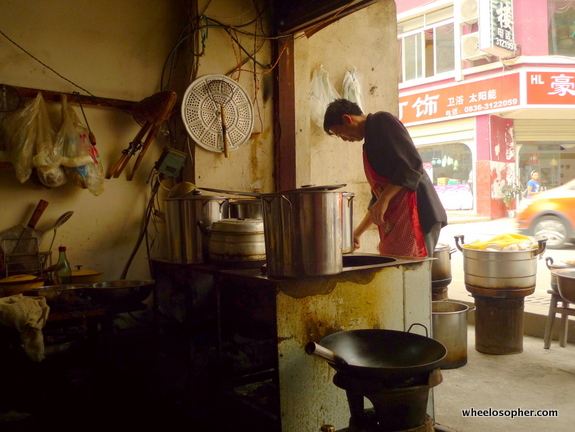 Filial son at work in their rustic little shop that had seen better times.

My 60Y room at a hotel meant for Chinese nationals. BY the time I was shown the room, agreed on the price and found out I wasn’t Chinese, it was too late for the young couple owner to refuse me the room, so they gave it to me anyway. Notice the little square hole on top? That’s ventilation for the next room that had no windows. I could hear a whole phone conversation going on between a Chinese cycle-tourist (there was a bunch of them staying here) speaking to his girlfriend in heavily accented Cantonese.

The view from my room. I always enjoy the sound of the river when I sleep.

Luding's claim to fame. The more-than-300-years-old bridge that turned the tide of war between Chiang Kai Shek's nationalists and Mao Ze Tung's Red Army. Both sides were racing through the night trying to capture this crucial bridege as whoever controlled it had the upperhand. When I was there, it was closed for renovations, but later in the evening, I sneaked in the enclosed area and walked across it.

Excerpt from Wikipedia on The Long March and the bridge:

Fleeing from pursuing Chinese Nationalist forces, the communists found that there were not enough boats to cross the Dadu River (Sichuan province). Thus, they were forced to use Luding Bridge, a Qing dynasty suspension bridge built in 1701. [1][2] The bridge consisted of thirteen heavy iron chains with a span of some 100 yards. Thick wooden boards lashed over the chains provided the roadway across the bridge.

On the morning of May 30,1935 the 4th regiment of Lin Biao’s 2nd division, 1st Corps of the Chinese Red Army received an urgent order from general headquarters: Luding Bridge must be captured on May 29, 1935, one day ahead of the original schedule.

The 4th regiment then marched 120 km in less than 24 hours. Along the way, they engaged and defeated numerous nationalist forces which blocked their path. On the dawn of May 29, 1935, Lin Biao’s troops reached the bridge, only to discover that local warlords allied with the ruling Kuomintang had removed most of the planks on the bridge. Furthermore, Luding City itself was occupied by a regiment of troops from warlord Liu Wenhui’s 38th Brigade, 4th brigade, under the 5th division of the 24th Corps. The brigade’s commander, Li Quanshan (李全山), was also a wealthy opium dealer. This was a common business for many of the local warlord commanders. Li Quanshan’s (李全山) direct superior, Yuan Guorui (袁国瑞), the commander of the 4th brigade, was reputed to be an opium addict himself, as were most of the troops[citation needed]. Li divided his regiment into two parts, with two battalions deployed inside Luding City, while another battalion was deployed some distance outside in the suburb. His defending forces still enjoyed numerical superiority over the attacking Red Army. The 4th regiment had lost considerable strength during the hurried 24 hour march – approximately two-thirds of the soldiers had fallen behind during the march – and only a battalion-sized force had reached the western bank of the Luding Bridge that morning.

Although it was officially closed to the public, I noticed there were some tourists walking across. The entrance was covered with hoarding but there was an opening in it and this was where people were slipping through. Obviously, I did the same. Mission accomplished. 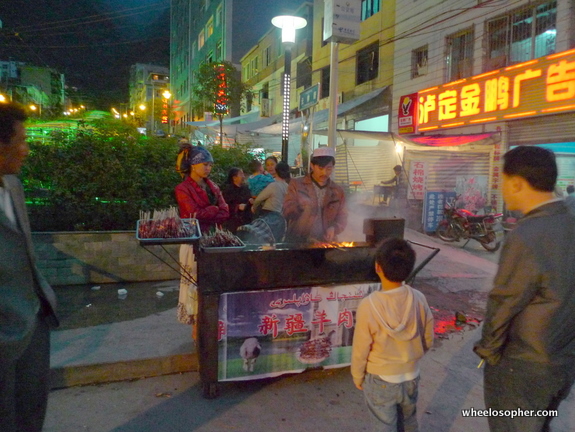 The best kebabs I have ever tasted. This hawker is a rare sight in this part of the world -- a Muslim Uighur from Xinjiang. 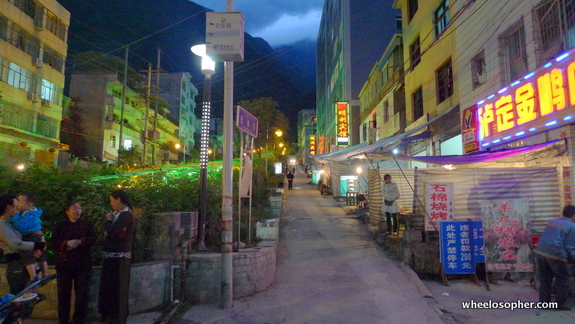 This particular street on a slope offered stall after stall of Sichuan BBQ.

From Luding, I’m only about 300 kms away from Chengdu, and the end of my tour. Tomorrow, my plan is to ride to about half of that and end the day at Yaan, a tea-growing region. Tomorrow will also be a very interesting ride up the mountains again (the last big one), and I’m really looking forward to riding through the 4-km long Erlangshan tunnel. So far, the longest had been about a kilometre long so this one should be interesting.

Bike from Kanging to Luding: 54km