I had no choice but to sit on the staircase for the ride to Emmerich since my bike was in a very inconvenient position, latched onto a railing that led down the steps of the exit. A little later, a seat nearest to the stairs on the upper level was vacant and I quickly took it, while still able to keep an eye on my bike. 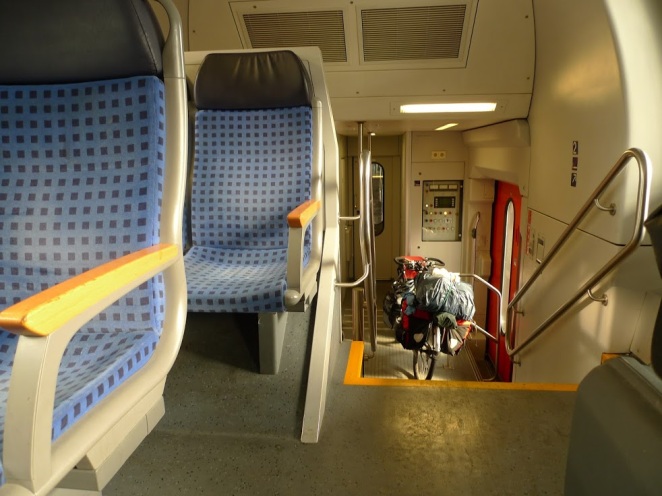 Just before Emmerich, as I was preparing to get off, a young German girl of about 20 or so who was standing next to me sensed that it was going to be quite a task getting my whole loaded bike down, asked me very sweetly, ‘Do you need help getting your bike down?’

I guess angels do exist after all 🙂

After helping me, she walked off quickly before I could take a shot of her. 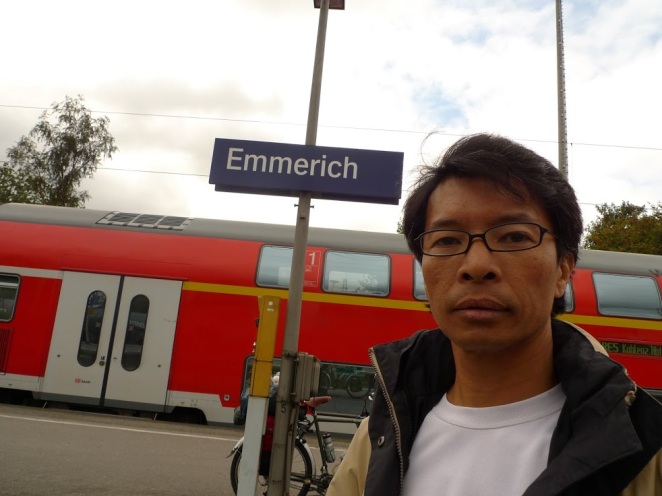 Emmerich was just a small dot on the landscape. The station was rather scrappy looking and had seen better days. The town was quiet with little activity. As I headed out of town, it began to lightly drizzle. With my jacket on, I headed out towards the Rhine, and the little hamlet of Millingen an de Rjin, which is Dutch for Millingen on the Rhine. From there I would soon be in the Netherlands. I loved crossing borders. 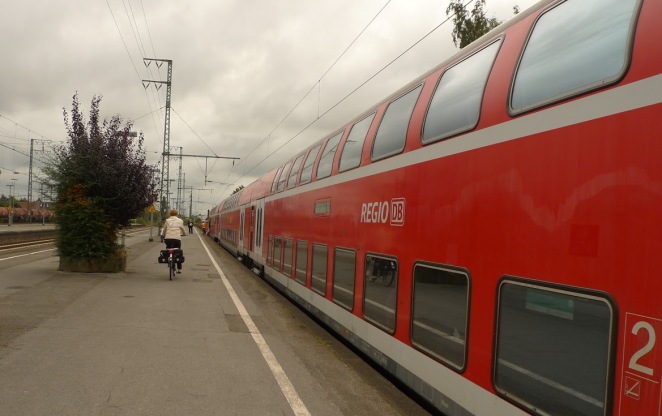 Outside the train station

What I’m always on the lookout for

Sculptures like this one facing the Rhine is common throughout Europe

Houses began to take on a decidedly different look … in this case, Dutch.

Just before I reached Millingen, I realized the signs were reading a little differently. Then it dawned upon me that I had already crossed the border into Holland without even knowing it. By then, I was fairly famished and food was on top of my mind. 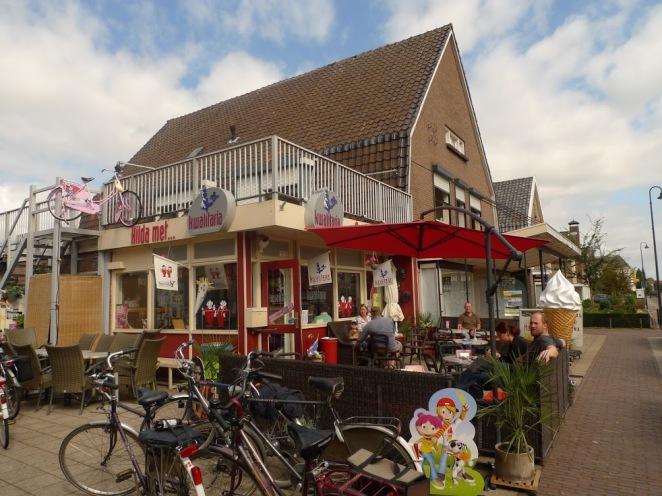 I spotted a cutesy-looking café and decided to make it my lunch-stop. It was some kind of fast food joint run by a friendly ‘couple’

‘Husband’ and wife, not twins

They were the only one working the cafe

They did serve a mean sandwich though

An interesting subject at the cafe

Interesting toilet of the cafe

After lunch it was time to continue my journey towards Amsterdam. But first, we have to cross the river by ferry..

Waiting for the ferry

This is a passenger/bicycle ferry only, no cars 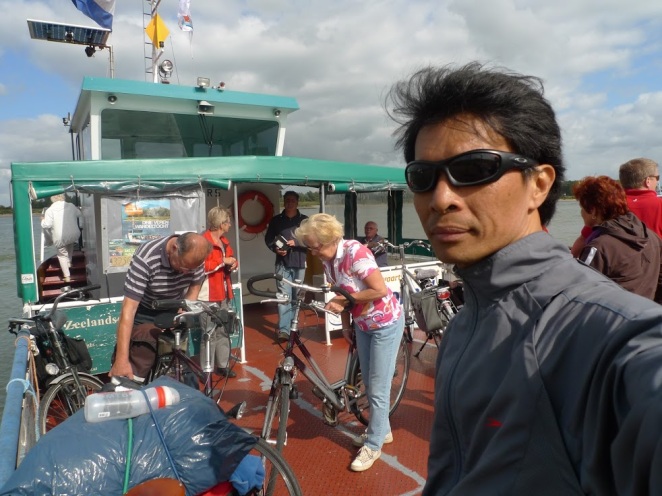 The Millingen ferry crossing, which was just a stone’s throw away, took less than 5 minutes. The Dutch, I realized later, were friendlier than the Germans and even on the ferry, folks on bicycles were already talking to me, asking me where I was from and appreciated the fact that I had come all this way to see their country (inevitably, they would also ask if I was Indonesian, as the country was once colonized by the Dutch). 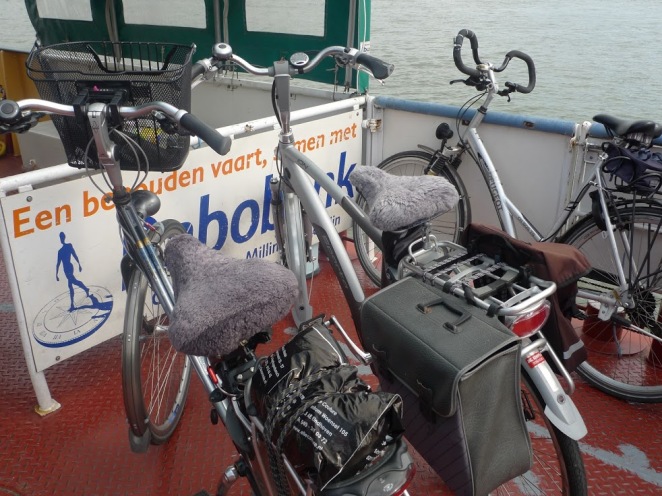 Nice comfy seats made from fleece for the more matured cyclists. Check out the handlebars … they like it as high as possible 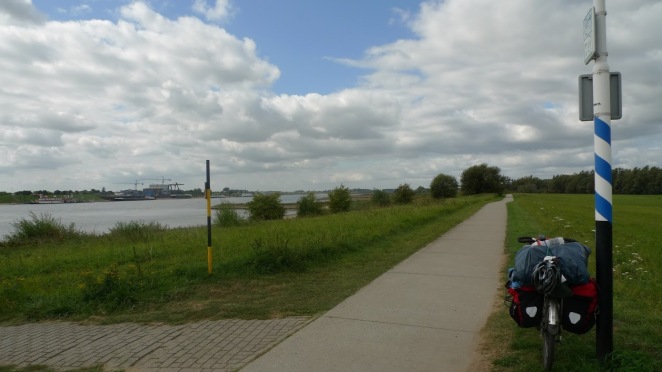 Once on the other side, there were I had to determine my direction of travel towards Arnhem, about 45kms away. 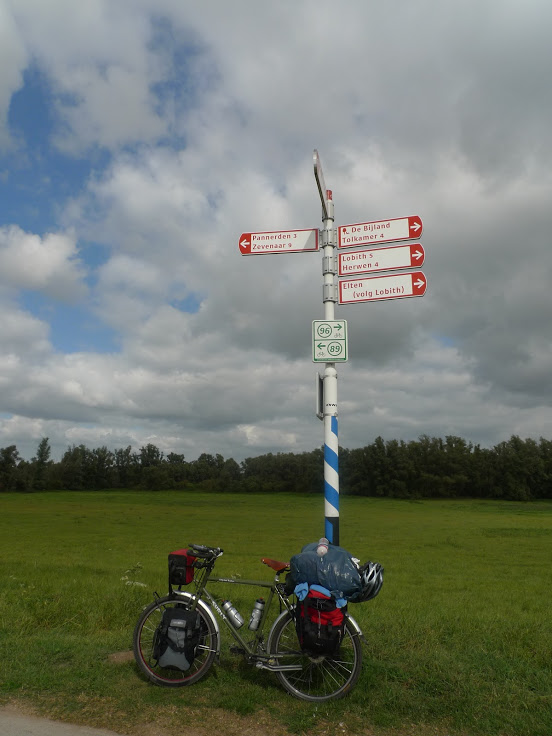 Can be quite bewildering. The signs in green are for specific routes, usually very scenic. The ones in red are for getting to the next village or town only. 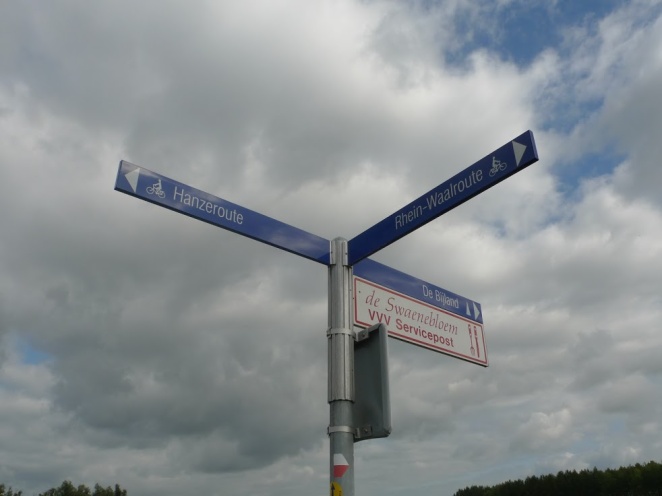 I met many cyclists along the way. All were friendly. This was Dutch lady #1 of the countless Dutch ladies on bicycles from whom I would ask for help.

This lady didn’t just give me directions, she ask me to follow her until the next town where she would show me the next easy route to take.

The outskirts of Arnhem. I wish I had time to explore this lovely town but I had underestimated the distance. It turned out that Amsterdam was about 134 km away, so I decided that in the interest of time, I would take the train to Amsterdam instead. 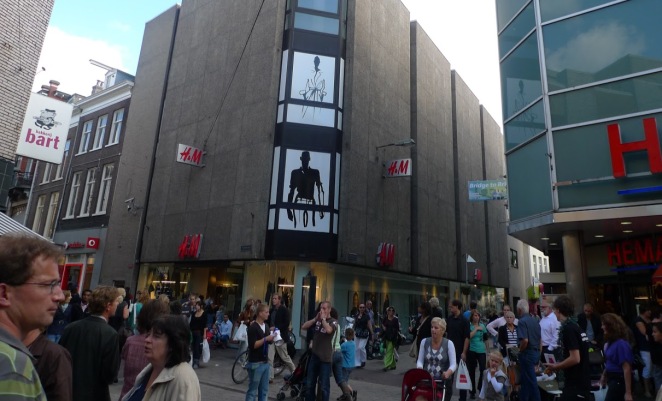 The modern, busy side of Arnhem

At the train station 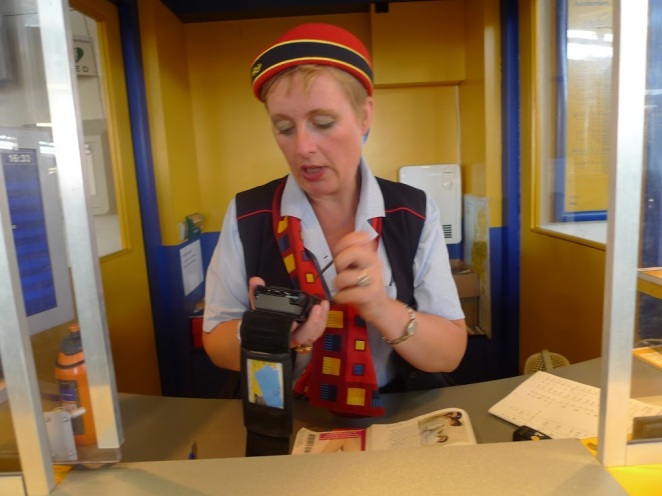 Good thing most Dutch speak some English, as did this helpful ticket lady

Fellow cyclists on board, all of them heading to Amsterdam. This couple was riding a custom-built tandem built by a well-known woman bike maker in Amsterdam.

Ample space on board

Exactly 1 hour and 4 minutes later, I found myself in the beautiful city of Amsterdam. I couldn’t wait to explore the city but first, I had to sort out the digs for the night — Camp Zeeburg, in the district of Zeeburg, about 20 minutes from central Amsterdam.

After registering and paying the 8.50 Euros (plus an 80ct token for a hot shower), I headed out to the tent area, following directions from the camp map.

It was a very big campsite and I was about to get the shock of my life.

It was a sea of green, blue, yellow, red and other assorted colours. It was also very noisy. My heart sank. All this time, I had been camping in relative luxury – big open spaces, few tents, quiet atmosphere — but this was different. I had stumbled on Woodstock. There were young kids shouting and singing, and the worst of all – the smell of marijuana was thick in the air (grass is legal in Amsterdam).

I finally picked a ‘quieter’ spot by the edge of the water, and where there were fewer tents. The only saving grace was the splendid view from my tent’s entrance – reeds bending in the breeze, ducks and swans and geese swimming and noisily skimming the water as they landed in a big group, and at night,  the amber lights of the bridge would cast a warm glow across the water.

It didn’t feel too bad after all, except that I couldn’t quite take the smell of marijuana constantly wafting through the air. Even the tent behind me was going at it, sitting at the tent entrance doing their thing, blowing through a jar with water gurgling and smoke coming out of it. Looks like happy days are here in Amsterdam.

Next: Exploring the city of Amsterdam.