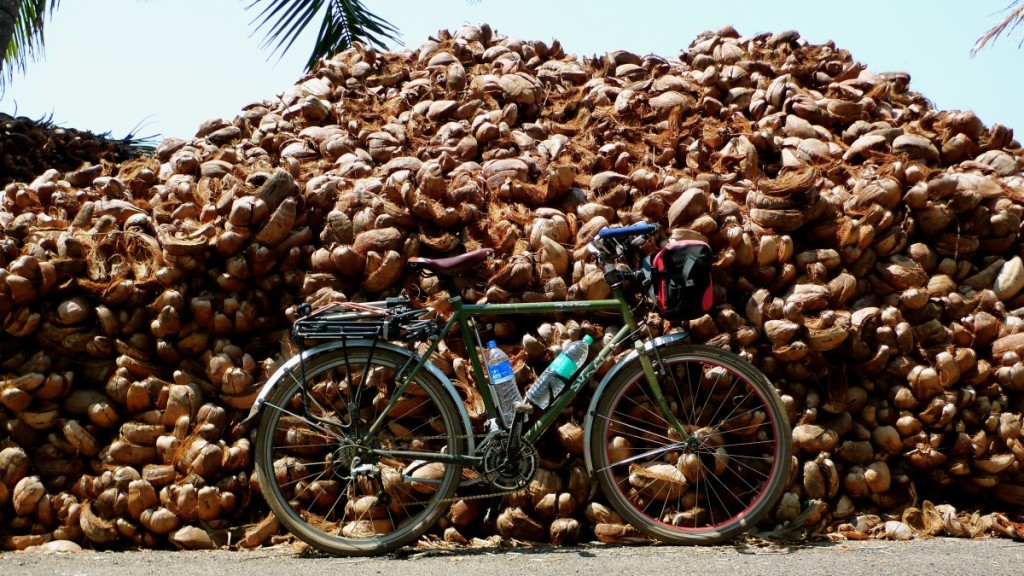 I’m only seeing Junee this evening after class, so I have some time on my hands. I’ve decided to ride to Malpe Beach for the day. It’s only about 10kms away and, minus the panniers, it’s going to be an effortless ride. But first, more serious business at hand …

The signs were there. They had been stepped on too many times, forced to work in the rain, dragged through mud, exposed to the hot sun day after day, then chucked aside at the end of a long day.

END_OF_DOCUMENT_TOKEN_TO_BE_REPLACED

Every day, on the road, my daily interactions with the locals have always been fun, interesting and friendly. I’ve not met a single person who would turn away from my camera, until today, at breakfast …

My breakfast stop is a little ‘hotel’ just outside Kahangad. As I often do, I try to photograph the owners in their element, but the all-women crew of this little cafe, although very friendly, all refuse to let me photograph them. But I’m not about to give in; so we play hide-and-seek — I point my camera at them and they giggle like little girls and run or turn away, screaming something in Tamil.

END_OF_DOCUMENT_TOKEN_TO_BE_REPLACED 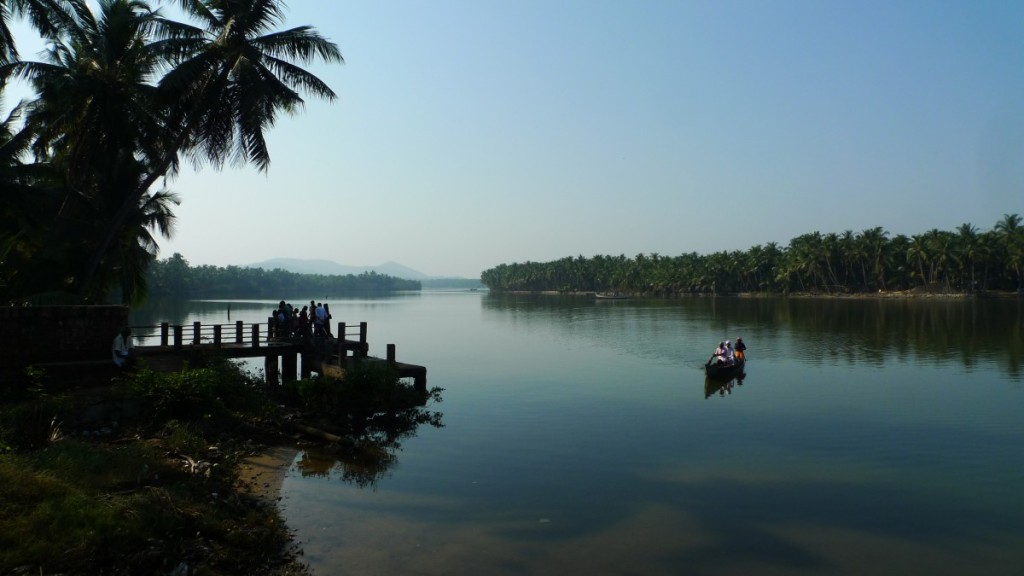 From what I can see on the map, it looks like it’s going to be another nice, scenic ride among the backwaters today. I’m really looking forward to that.

There are 2 places I want to visit today: Kavvayi island, and the long, narrow peninsula of the Valiyaparamba backwaters. It also looks like there are many water crossings today.

I head towards Kavvayi island first but it turns out to be nothing much. The draw of this place is likely the small, upmarket B&Bs located on the fringes on the island, apparently popular with well-heeled city slickers. So I turn back and head for Valiyaparamba instead.

END_OF_DOCUMENT_TOKEN_TO_BE_REPLACED

The coast is just a few kilometres west of Kannur town. Like every other beach I’ve seen so far, it’s beautiful, unspoilt, and most of all, there are no fancy resorts blotting the perfect landscape. This is very likely the opposite of hippie-infested Goa, 300kms up north.

It’s a beautiful morning — blue skies all around. It’s still a bit early so the sun hasn’t reached toasting temperatures just yet. I ride at a very leisurely pace here. It would be a shame to do otherwise.

Payyambalam Beach, the first of many beaches I will be riding on today. The sound of gentle waves lapping the shore, and coconut trees rustling in the sea-breeze infused with the tang of salty air is just … mesmerising.

END_OF_DOCUMENT_TOKEN_TO_BE_REPLACED

Ride, eat, drink, and again … What’s not to like about cycle-touring?

On the road, food and drink is always something to look forward to, seemingly throughout the day. Whether it’s capati, prata, dosa, idli, briani or fruits and juices… it doesn’t matter, I’ll eat and drink when the fancy hits me. Did I mention that food and drink is cheap?

END_OF_DOCUMENT_TOKEN_TO_BE_REPLACED

Today is my first train ride on the renowned Indian railway. It should be fun, even though I’m riding in air-conditioned 2nd class. Most avid travellers to India say that the real experience is to be had in 3rd class — free seating on not-as-soft benches, no air-con, but filled with the lower (read ‘friendlier’) strata of Indian society. 2nd class is where most middle-class Indians are found; you know, the ones who speak English, are tidy, dress well and who won’t simply barge into your face asking what you do for a living.

You know you’ve arrived/leaving your destination when you see one of these bright yellow signages.

I’ve already bought my ticket so I head straight for the Cloak Room, half expecting Harry Potter to magically appear  on Platform 9 1/2 on my way there.

Everything is still very much analogue here. 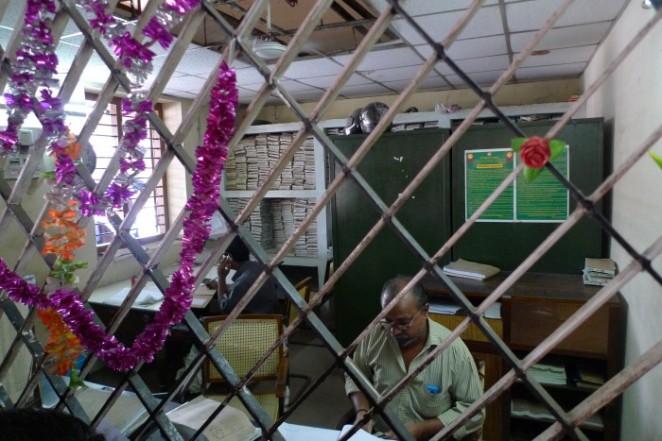 Indian bureaucracy at it’s best … even here, I was shuffled between 2 clerks to fill out 2 different forms, just to get my bike sorted for carriage in the cargo car. Check out the shelf full of forms at the back.

T & C for 2-wheelers. The sentence in red refers to emptying the petrol in the tank. Guess that doesn’t apply to me. 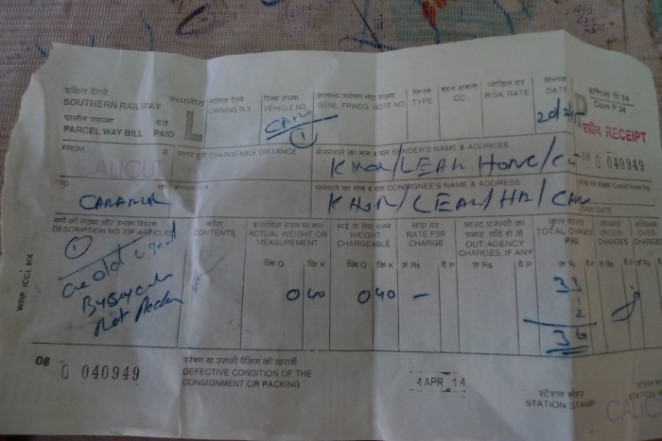 Receipt, in triplicate, no less. Notice it says from ‘Calicut’ to ‘Cananur’, which is the old name for Kannur. Below that is the precise description of cargo — ‘One old used bicycle not packed’. I’m a bit peeved that they needed to add the word ‘old’ to my used bicycle. 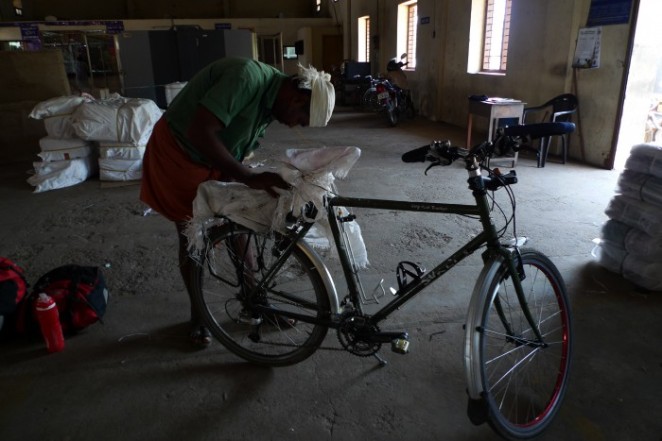 And that, to my disbelief, is the extent of packing my bike ready for carriage as cargo. 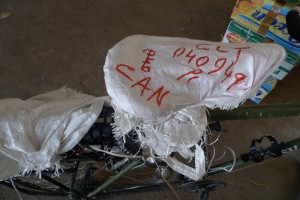 I have the privilege of sitting next to a retired Indian doctor and his wife. He’s dressed in impeccable white, as befitting one from the Brahmin class, and speaks impeccable English. 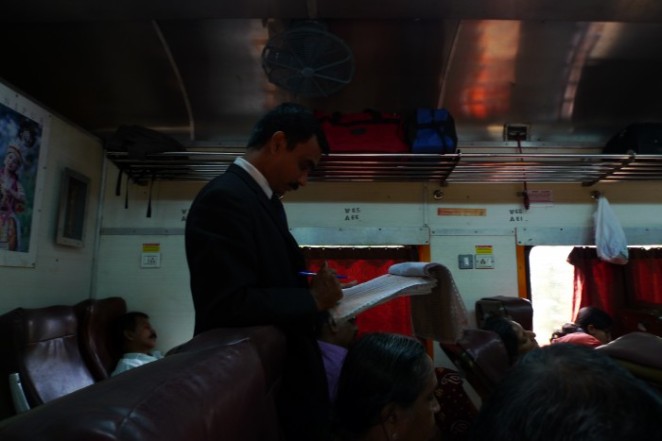 Even the ticket inspector is impeccably dressed.

At Cannanore, or Kannur, the porter wouldn’t even let me touch my bike as he wheeled it to the cloak room. They clearly observe proper security procedures here.

I seem to be attracted to palatial lodgings — I stayed at the Taj Mahal in Cochin, so I guess this isn’t out of place. Not too bad as princely accommodations go. Only 430R a night, no air-con, which frankly, isn’t really a necessity, as the air is cool and dry at night.

For the rest of the day, I explore the little seaside town of Kannur, ending up at a grand-looking cinema called Little Kavitha. As it happens, catching an Indian movie in an Indian cinema is something I really want to experience, so it’s Bollywood time!

At the box office, the ticket seller turned out to be the security guard with whom I was just chatting a while ago. That’s cheap labour, Indian style, I guess.

Not surprisingly, the movie is in Hindi, and with no subtitles. But the surprising thing is, I can actually understand the whole story (about a good guy who took revenge for the killing of his family by some bad people). Now, that’s what I call good storytelling. The other un-surprising thing is the rest of the movie-goers. The non-stop whooping, howling and whistling is just well … typically Indian. It’s a longish movie, too, almost 3 hours, but with a considerate interval halfway for the cancer-stick addicts to take a break from the whooping and howling.

After 6 days on the road, I think I’ll take a day off and just rest up, loaf around, explore the city a bit… That and also because I have to buy a train ticket for tomorrow’s segment from Calicut to Kannur, which I have no intention of riding, as it’s mostly on the N17. There’s also arrangements to be made for my bike to be carried on the cargo car of the train. Knowing the way Indian bureaucracy works, I’d better work it out to the last detail now than to be given to the go-around tomorrow.

The early morning Calicut city skyline, as seen from my room 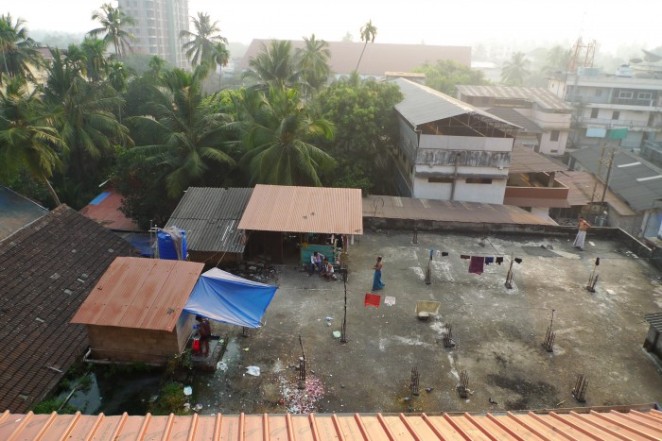 Turned my gaze down and what do I see? A bunch of guys living on the rooftop of the next building just below my window, busy with their morning ablutions.

They’re fascinated that somebody is fascinated with their mundane activities. 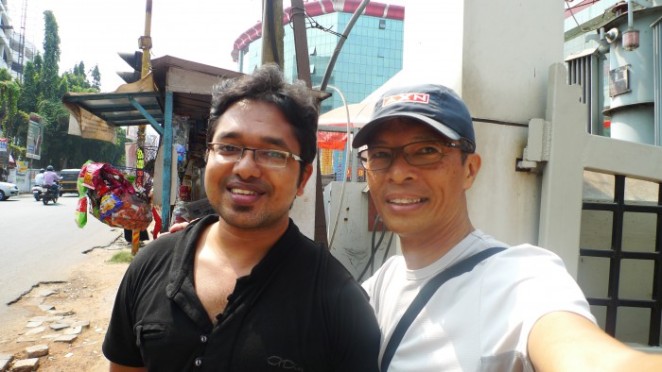 Prasad, one of the guys working at the hotel’s reception desk. He was kind enough to help me sort my mobile data plan with Docomo. Using a phone in India is about the most frustrating thing ever. One you cross the state border, your data plan is as good as useless. There are so many restrictions and procedures I won’t even bother to elaborate. India is a very paranoid country when it comes to the threat of mobile phone activated bombs which, incidentally, has happened before.

The quickest way to get around. The railway station wasn’t near enough to walk so I took the lazy alternative.

Easy peasy instructions on how to book a ticket 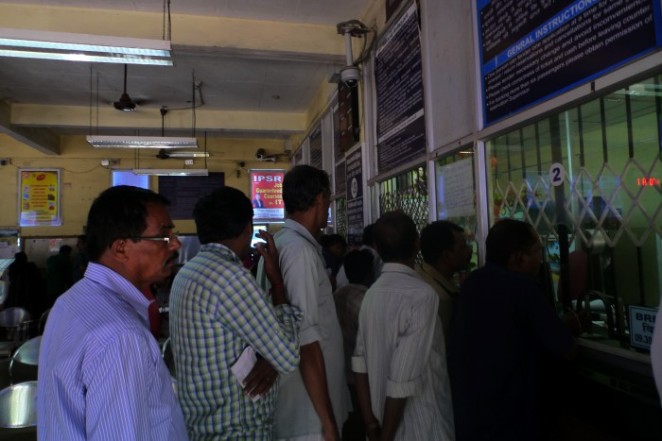 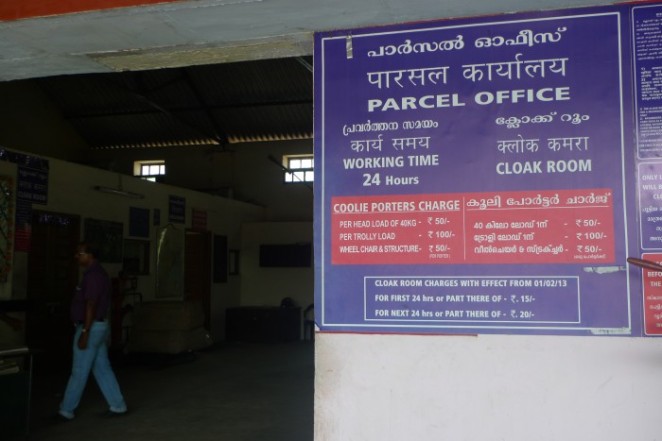 Ticket done, now to sort out the bike.

Another round of Q & A and I’m good for tomorrow’s train ride to Kannur, with bike in the cargo car.

Calicut is an interesting city, not very modern but with plenty of old-world charm. Walking around the bazaar near the hotel, I feel like I’ve gone back in time. As with anywhere busy in India, the atmosphere is always noisy, colourful and filled with every imaginable smell on the fragrance spectrum, from heavenly to some very funky, indescribable ones.

One thing’s for sure, it’s anything but dull in India.

White Lines Hotel (see the white horizontal lines of the building, duh…), where I’m staying, is just a little bit off the main road so the noise doesn’t quite penetrate through. But once on the main road, it’s a different world.

Absolutely no idea what miracle product this is. Cleaner banana slices, maybe?? 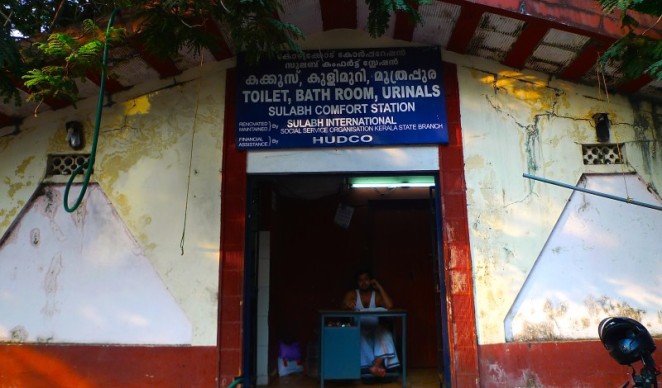 A ‘comfort station’. What a lovely name to call a stinky toilet 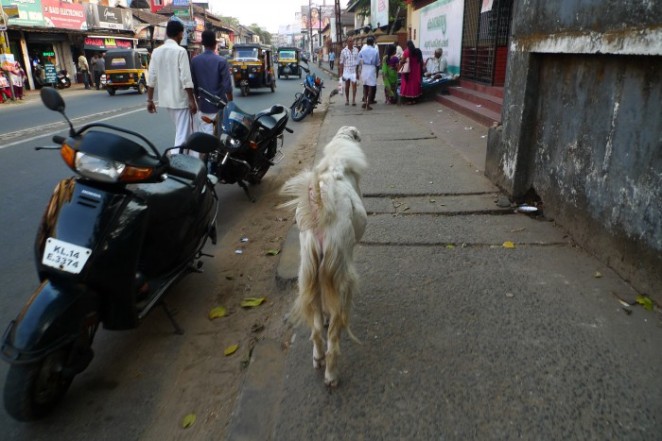 As are old billy goats taking leisurely strolls around town. Word of advice; never walk behind one of these strollers, unless you enjoy sniffing goat perfume. 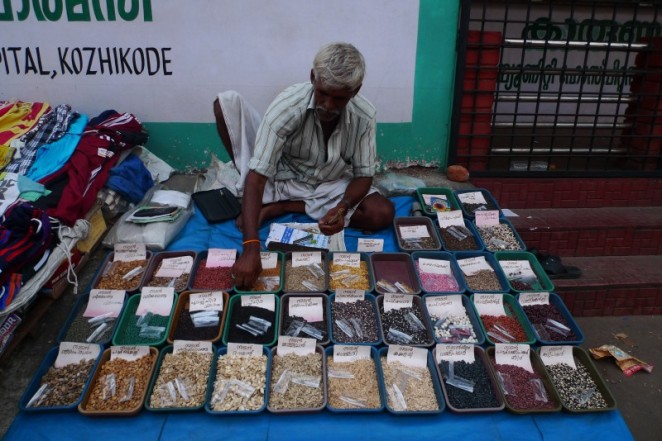 Local fruits are cheap and plentiful in India. 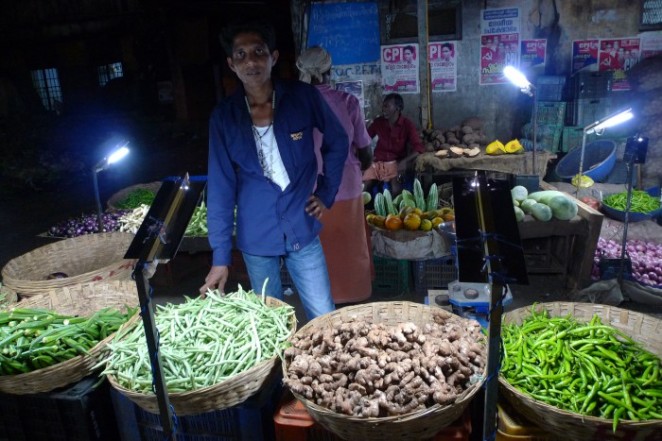 All the vege stalls here seem to be using mini fluorescents to highlight their wares. 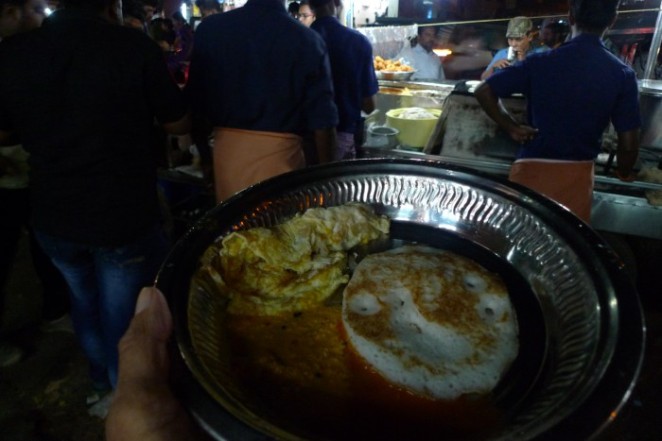 Only 10R for a small dosa and half a fried egg.

It’s been a rowdy, fishy morning, but now it’s time to take to the road again. I’m heading for Calicut, or what is now called Kozhikode. I like the old name better, more exotic. In fact, most Indians still refer to it as Calicut.

Since I left Cochin, the riding has been great. Meandering along the coastal roads, exploring the backwaters, meeting friendly locals, and just going where few cycle-tourers have ever been. I’m hoping for more of the same today. 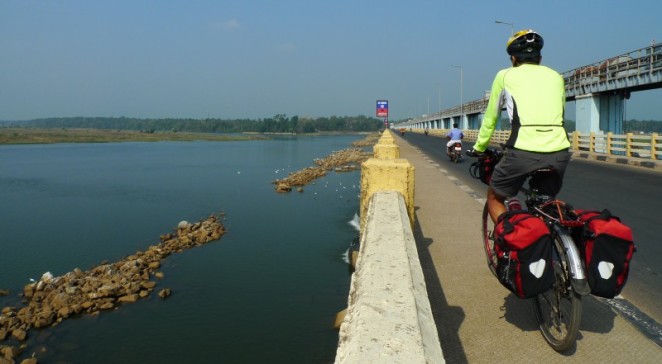 The road less travelled…is like opening a wrapped gift 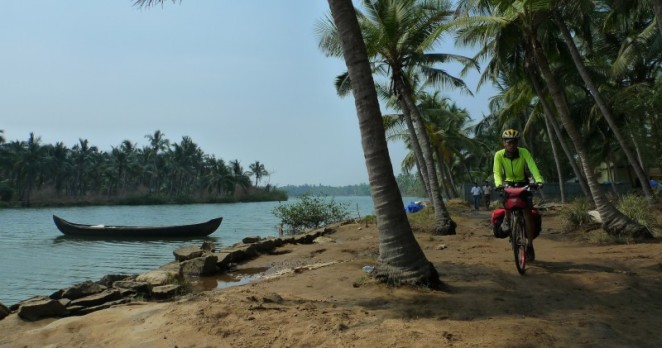 Sometimes, I would just ride until the trail peters out to the water’s edge and then I would turn back and explore another interesting looking one. 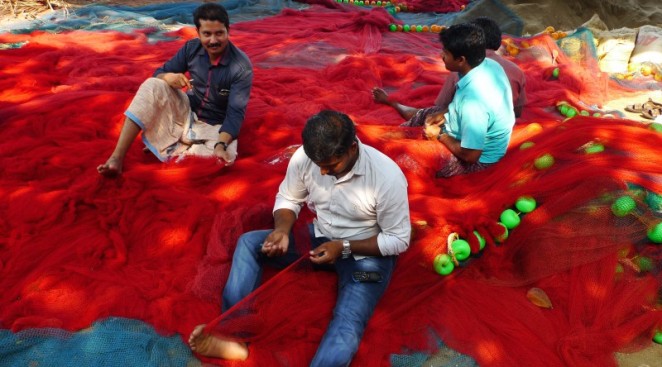 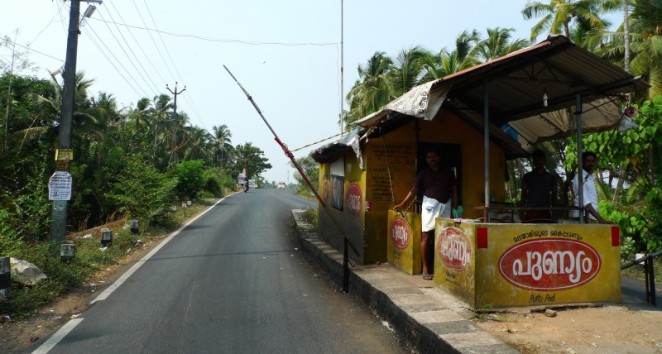 A primitive toll setup at one of the many bridges I’m crossing today. Not all have tolls though, and bicycles are free anyway.

Sometimes I feel like a celebrity when locals, like this group here, runs across the road shouting excitedly, stopping me in my tracks  … just to take a wefie.

Inevitably, I have to turn back to one of the main roads. This one is surprisingly nice to ride on; smooth, straight and with a wide shoulder.

Just before Calicut, the traffic becomes normal again … as in, noisy and chaotic. Strangely, with all that honking and getting buzzed by lorries, buses and autos, I don’t feel like I’m in danger of getting swiped off the road. All I have to do is keep my line and everyone else just avoids me. Kinda reminds me of the equally crazy traffic in Vietnam. I call it orderly chaos. I suppose if I can ride through this mess with a camera in one hand unscathed, I’ll do fine.

By the time I find a decent hotel, it’s getting quite dark, and I finally end up at a hotel called White Lines. 700R a night. I think I’ll stay another day and check out the town. And since it’s not too far from the railway station, I’ll enquire about taking the train to the next town of Kannur. From what I can see on the map, there’s not much chance of riding coastal roads on this leg, and riding Highway 17 all the way there is not fun at all. 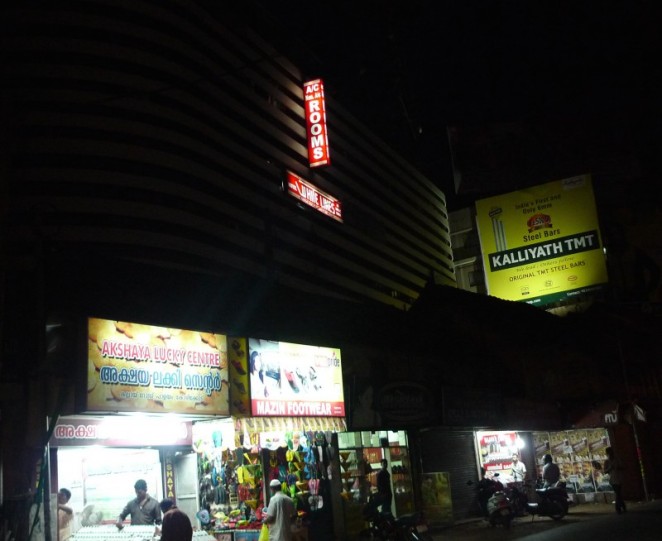 White Lines Hotel, located just off the main road behind these stalls. I wonder if it’s a reference to snorting dope…