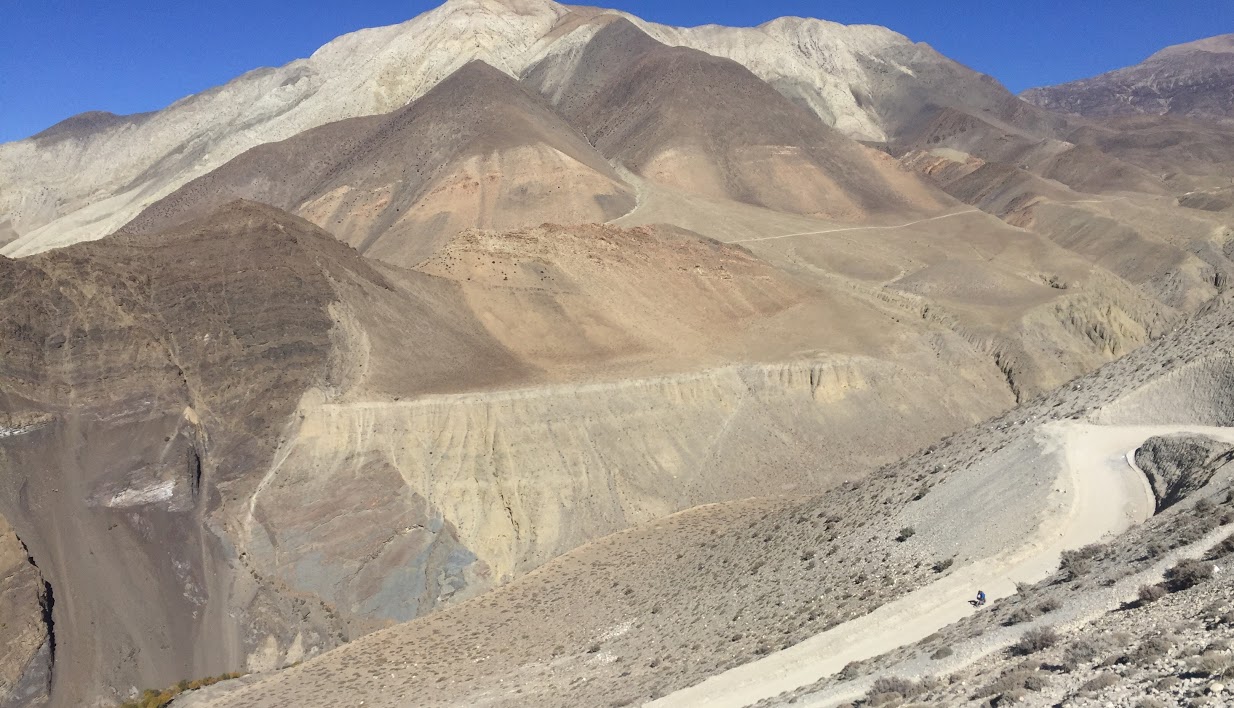 Muktinath provided us with a much-needed good night’s rest (two of us had suffered from sleeplessness for the past few nights, a documented symptom of AMS). But after our next overnight stop at the quaint little village of Marpha, we decided to hop on a local bus instead.

The scenery along the Gandaki riverbank had become less inspiring. Ditto for the copious amount of dust we breathed in, churned up by the constant stream of motorcycles, jeeps, lorries and buses plying the Muktinath-Pokhara route.

Our new friend Rajat, a Nepali from Katmandu whom we met first met at Manang, was left to his own when his friends decided they had had enough and turned tail at Manang and took the jeep back. Rajat joined up with us at Muktinath and together we rode to Marpha. While we took the bus to Pokhara, he rode instead.

The semi-desert like terrain is characteristic of the Mustang Valley. Such a contrast to the other side.

The village of Kagbeni is set against this arid yet beautiful landscape. The people here seem to be more than able to eke out an agricultural subsistence, thanks to the river 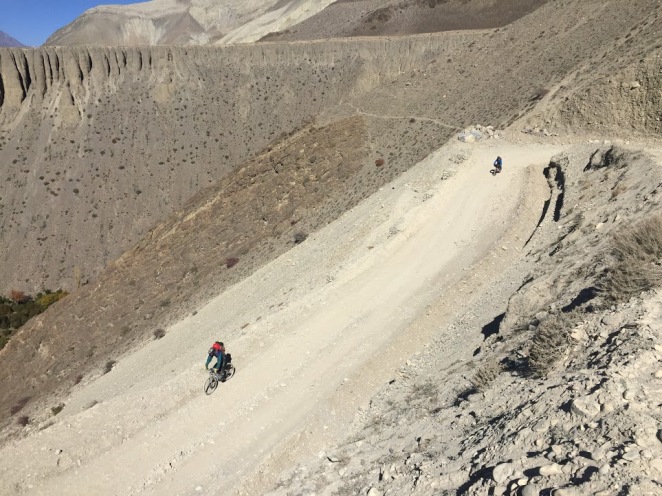 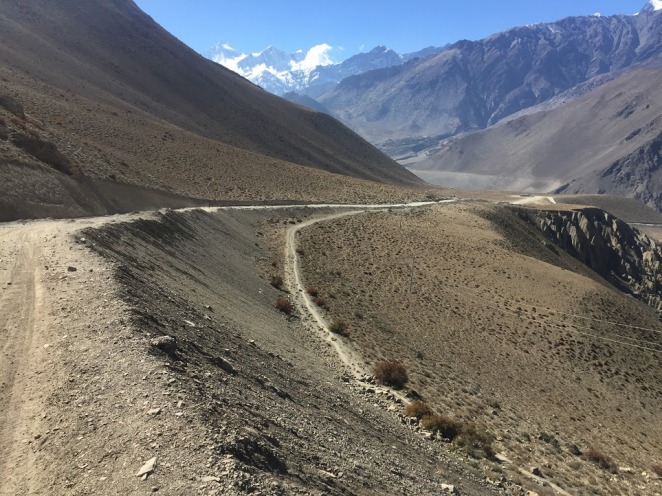 Our stop for the day was the quaint little town of Marpha, characterised by its neat whitewashed buildings.

Another rare sight in Nepal — clean streets. Tibetan in nature, Marpha buildings exhibit the  typical Thak Khola architecture of flat roofs and narrow paved alleys. It is also the apple capital of Nepal. 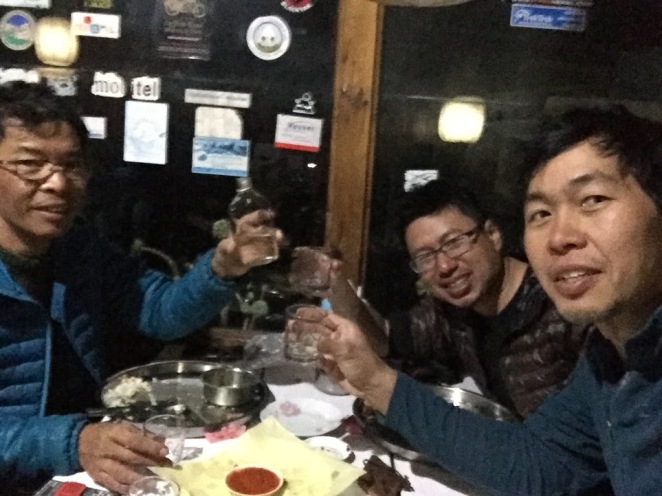 Apples being the hero here, we had to try the apple brandy. Not too bad.

The next day, we decided we’d had enough of the dust churned up non-stop by the endless stream of buses, motorcycles and jeeps…we took the bus instead. This was bus #1, which took us all the way to Beni. 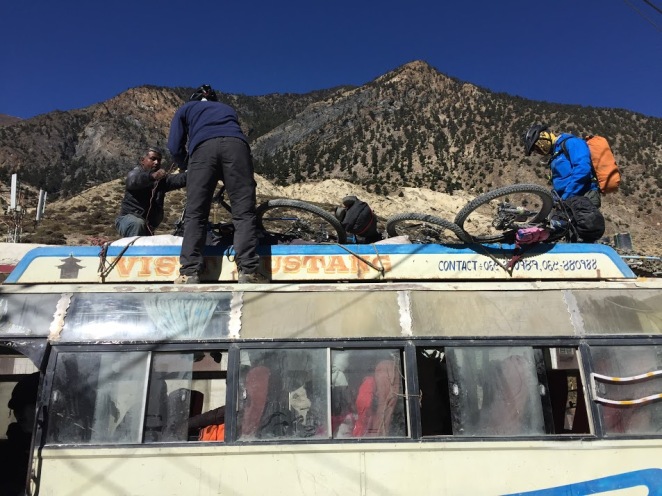 After three changes of buses, the first two of which we were tossed around like sacks of Nepali potatoes as the drivers did their best to wreck the un-wreckable Tata buses on the bumpy jeep road, we finally arrived in the city of Pokhara late at night, bruised, weary and very hungry,

Our first thought was … meat! We had been deprived of our carnivorous cravings on the trail, meat being an expensive, hard-to-come-by commodity. We had our fill for the next two days, and in between meals, lazing in a hotel near the popular Pokhara lake before we made our way back by air-conditioned bus to Kathmandu. 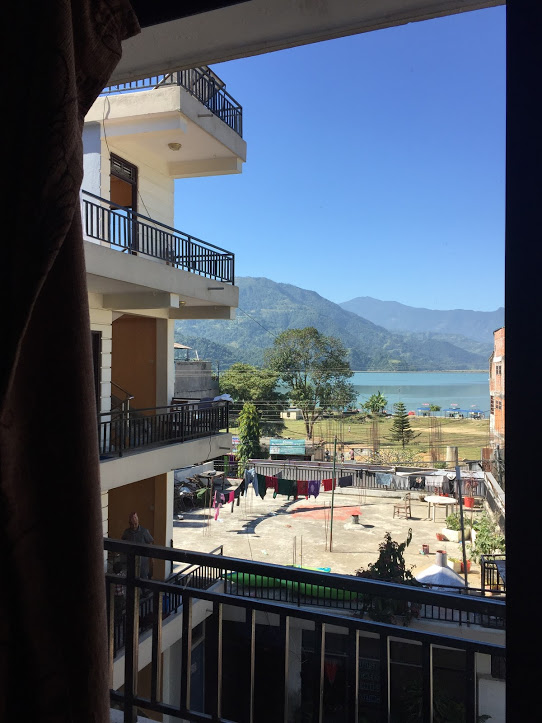 Nice view of the Pokhara Lake from our hotel room.

From here on, it was going to be non-stop eating and drinking our fill to satiate our alcohol- and meat-starved bellies. 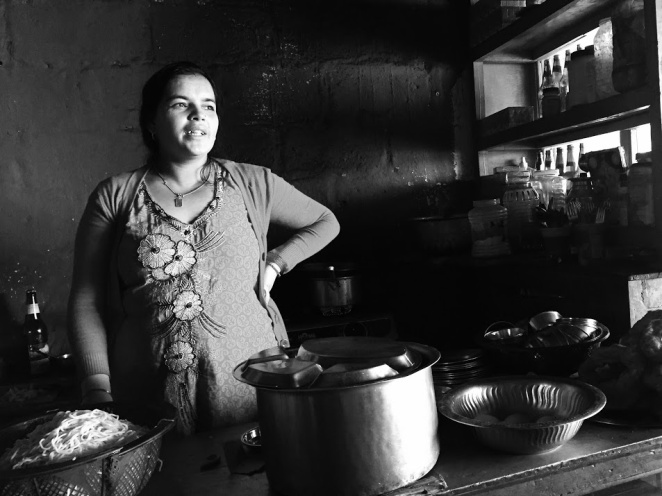 Our favourite little stall in Pokhara. She served a mean version of doughnuts with potato/chickpea/dhal curry, and ‘chia'(milk tea). 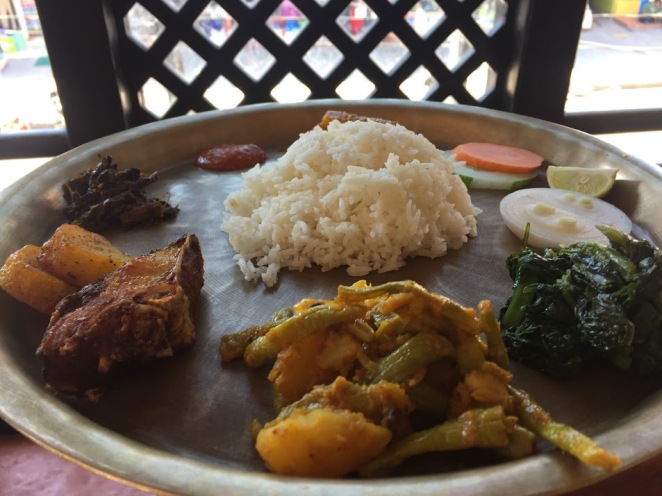 In between, we had our fill of Thakali. This shop, Thakali Baancha, served the nicest set we had eaten throughout our trip 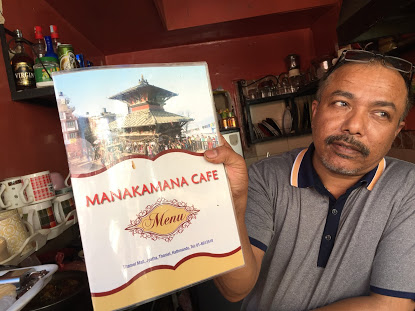 Back in Kathmandu, the eating frenzy continued. We visited our favourite stall, Manakamana. Cheap and super delicious. 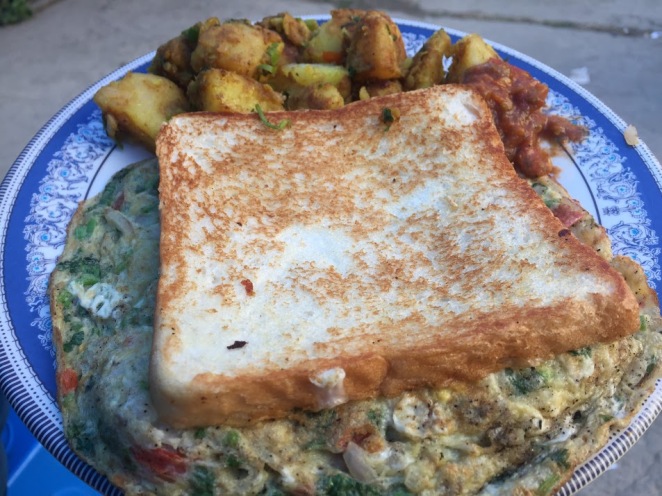 Breakfast at Manakamana. Hard to beat…

For lunch, it had to be Manakamana again.. Richard reckons it’s spot on.

In between meals, we visited with Sonam, the owner of Dawn Till Dusk bike shop and Annapurna bike guide. We first met him when we stumbled on Manakamana and then met him again on the trail while he was guiding 2 German clients. His shop is just a few metres from Manakamana. 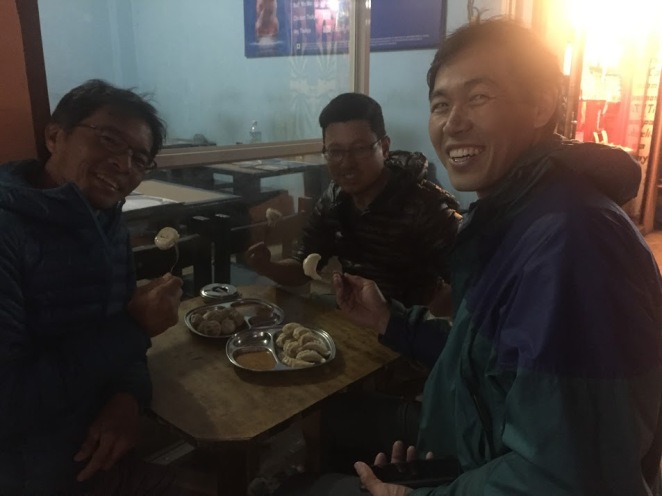 Of course, how could we say goodbye to Nepal without tucking in at least one more round of momos?

Or naans at our favourite naan shop?

Riding the Annapurna Circuit is probably not on every cyclist’s bucket list, but I was glad to have done it with my friends, Mike P and Richard. It was nowhere near easy but it was damn good fun. Would I do it again? Probably not. As I always say — too many roads, too little time. Been there, done that. So what’s next?

I leave you with this video of the Annapurna Mountain Bike Race. It used to be called Yak Attack, and it was the brainchild of Sonam of Dawn Till Dusk bike shop. Understandably, there are not many who dare sign up for the ‘highest altitude bike race in the world’. It’s tough, and then some.