Tour of Hokkaido. Day 1 and 2, KL to Tokyo to Hakodate.

‘Arigato gozaimas’. The sole Japanese among the Malaysian cabin crew bows as I make my way out of the plane. Charming.

Tour of Hokkaido has officially begun.

Haneda is nowhere as big as Narita but still, it’s a long walk to immigration and baggage-claim.

By the time I roll my trolley into the arrival hall, it’s past midnight. All public transportation, except taxis, has ceased for the day. Now I know why some of the Jap passengers were running. They were trying to catch the last train to Tokyo, and beyond the city. Otherwise, it’s an uncomfortable night at the airport, which is what I’m already preparing myself for.

It’s going to be a long day.

But first, a midnight snack. Asking around, I locate the only convenience store in the airport, a Lawsons, on the ground floor. I see hot food at the checkout counter. I pick a taufu, a hard-boiled egg and what looks like a meat dumpling. The cashier spoons them into a styrofoam bowl, and generously bathes them with the hot soup they were idling in. I also pick up a chilled Suntory beer to accompany the hot food.

Yong Tau Fu this is not…

There are travellers camped out on benches here and there, some stretched out asleep. I hear snoring from a generously sized man with his face covered with a white towel. I pick my own corner to enjoy my little meal. 3 young girls behind me are engaged in animated chatter, continuously punctuated by howls of laughter as they recount some hilarious incident. Bad choice of hangout for me. After a while, I take my trolley and move to a quieter spot and try to get some sleep.

My ride starts from Hakodate on the island of Hokkaido. But first, I have to get to Tokyo station, by the first train out of Haneda — the 5:17am monorail, then a change at Hamamatsucho station for the Yamanote line train. At Tokyo station, I have to chill out for an hour or so waiting for the Japan Rail Pass exchange counter to open at 7:30am. Once I get my 14-day unlimited-train-ride JR pass, I’m good to go. 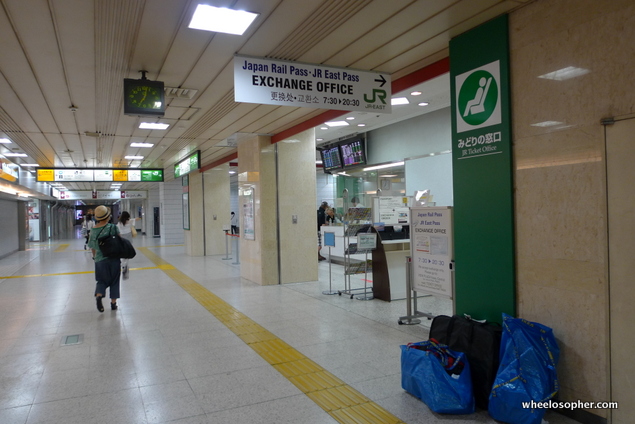 The first segment is from Tokyo to Shin Aomari on the northern coast of Honshu by a bullet-fast Tohoku Shinkansen train – the Hayabusa. This sleek, smooth and silent missile on rails takes a mere 3 hours to cover 717 kms, with speeds that top a blistering 320kph. Going past stations, everything is just a blur.

From Shin Aomario, I transfer to the more sedate Limited Express Super Hakucho bound for Hakodate, a 2-hour ride, one hour of which is spent rumbling through a 53-km undersea tunnel. 2pm. Super Hakucho glides into Hakodate station.

By now, my shoulders and arms are stretched to breaking point. My right arm is lugging the Bike Friday in a bike bag, my back holds a dry bag inside an Ikea bag with my tent, sleeping bag and Thermarest mat and pillow; my left arm is carrying 2 panniers in another Ikea shopping bag, and, slung across my stomach is my handlebar bag. 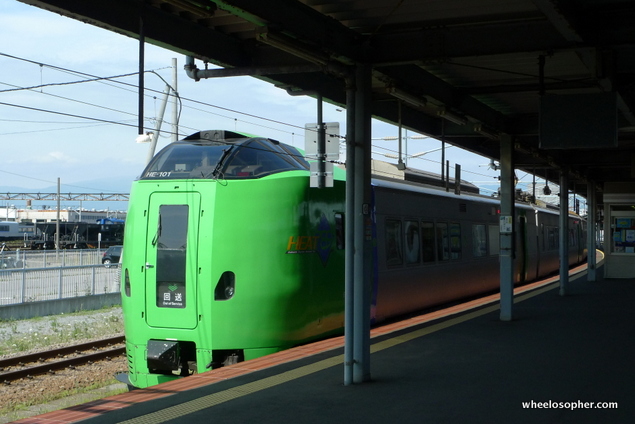 The Limited Express Super Hakucho. Definitely not as sexy as the Hayabusa.

On the Super Hakucho, they impress passengers with this little placard which reminds you that you are now travelling in a very long tunnel which is buried under a lot of water some 240 metres below sea level. Impressive. 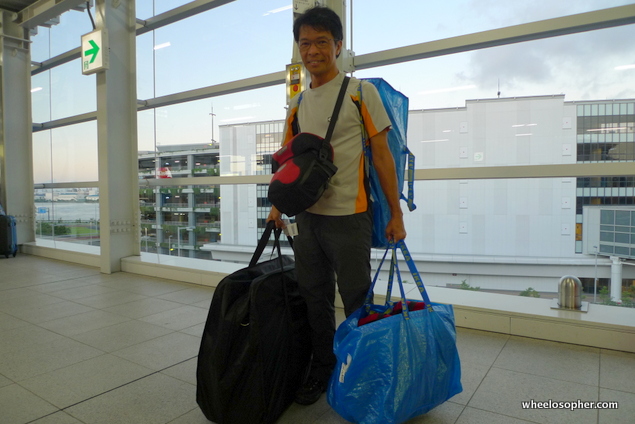 The Limited Express Wheelosopher, fully laden and slow as a turtle. The smile is about to be wiped off my face. I have to stop, put everything down for a few seconds before I can continue…

I am the antithesis of the average Japanese traveller. When it comes to luggage, size is everything to them. Small, and preferably on wheels. Mine is neither. I draw a few bemused looks from Japs as I struggle from point to point.

It takes me more than an hour of leisurely assembling to get the bike together. All the while, it’s busy, busy outside Hakodate station. Colours and sounds are exploding all around me. It’s some kind of ‘matsuri’ happening. Summer madness hasn’t waned just yet, even if it’s the weekend after Bon Odori, Japan’s most rioutous summer festival; and even if it’s scorchingly hot under a cloudless blue sky.

Groups of young men and women dressed in anime-like costumes and hair to match stride across the square in orderly lines, snaking away in differrent directons to do their thing. I hear spirited singing and shouting over the speakers from different corners. 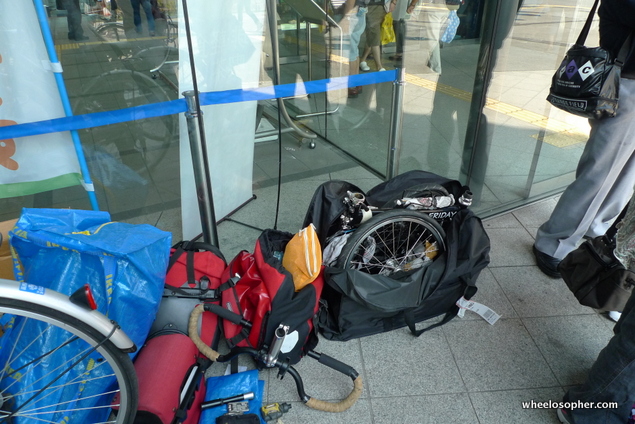 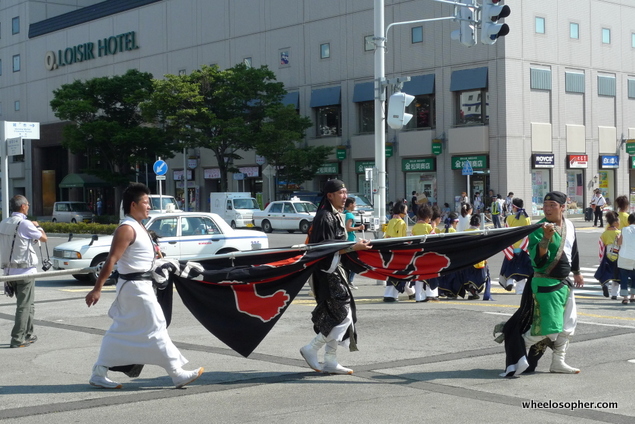 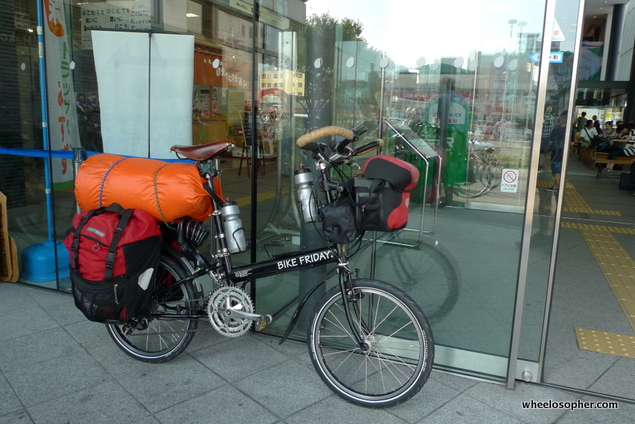 By the time I’m on the road, the matsuri is over. I point my bike north, stopping at more traffic lights than I care to count. The Japs wait patiently at every light – on wheels or on foot. It’s unthinkable, and uncouth, to ignore or beat a light, even if there’re no cars, motorcycles, bicycles or humans around.

My stomach grumbles at me to look for a ‘kombini’, or convenience store. Kombinis are as ubiquitous as vending machines; they’re everywhere, even in remote corners. At the next 7 Eleven, I get my lunch of a packet of buns and a 2-litre bottle of Pocari Sweat.

I ride pass Red Pines which flank both sides of the road. They’re impressive specimens, tall and shady with limbs that stretch out confidently in all directions. They look like they’ve been around many times longer than I’ve been alive. But they’re the only things that capture the imagination. It’s a surprisingly bland landscape of cookie-cutter Japanese houses that come in only a few predictable colours and shapes.

My target for the day is an easy 40km ride to Lake Onuma, and free camping by the lake. I’m looking forward to neutralising the restless hours I spent at the airport.

The road begins to climb gently. With surprising regularity, I see passing motorcycles loaded with gear for touring. They wave and nod as they pass by, kindred spirits on the same road to different adventures. Motorcycle touring is big in Japan. So big they have maps designed just for this particular pursuit – the Touring Mapple series, very popular with both engine- and pedal-powered tourers. I have mine as well – the Hokkaido version, complete with every detail that the tourer requires, from recommended campsites to onsens to locations of the nearest kombini.

As I crest the incline, the open mouth of a brightly lit tunnel yawns into view. The road inside is on a slight decline, just the way I like my tunnels, which are my biggest bugbears when I’m cycle touring. They are usually wet, cold and with only a sliver of a shoulder to ride on. The tiniest car coming up behind always sound like a mammoth truck coming down on you. And when it roars pass, the turbulence of the air caused by the vehicle shakes you just enough to rattle your nerves. I don’t usually dawdle in any tunnel.

Out of the tunnel and past a traffic light, I turn right onto a road that immediately dips downwards towards the lake. Glimpses of the lake peek through the trees. My spirits soar. Coasting down the road in the cool of the evening with the sun setting over the horizon, I’m excited by the prospect of my first night’s camp in Japan.

There are not many cars on the road that rings the lake. Onuma is a quiet little town. There seem to be more shops and cafes serving tourists than locals.

There are 2 convenience stores, a 7/11 and a Lawsons. I pull into the 7/11 to get supplies for tonight’s dinner, and for breakfast tomorrow. The manager asks if I’m camping. I say yes and he shows me a typical Japanese sign for ‘no, it’s not open/available/happening’, by crossing his forearms into an Ultramanlike X.

The campsite is closed, he says. But, he smiles and goes on to indicate that I can camp at any open space (I think). I collect my shopping and left the place. It’s getting dark, but I push on, determined to find the campsite anyway and camp there.

2 clicks down the road, I see the roof of a small pavilion with its structure below the road level as I turned a corner. It’s only a few metres from the lake’s edge, and a quiet spot for visitors of the lake, a little shelter with one low bench to sit and contemplate on the serene landscape.

Even by the fading light, it’s clear that this would be my stealth-camp site for the night. Situated below the road level, I’m somewhat hidden from view by passing cars, not that there are many. More importantly, they’re not lighting up the whole campsite with their lights as they drive round the corner.

Good to know that I’m safe and protected.

What more can a wild-camper ask for? Great location, great view, partly hidden from the road, and best of all, clean water to wash up with.

‘DO NOT RELEASE BLACK BASS INTO THE LAKE’ The Black Bass is a predatory fish that can threaten the lake’s ecosystem. It’s also not very tasty so not popular as a catch.

I move the bench to clear a space for my tent which is up in a few minutes. I haven’t had a shower since yesterday morning so the lake is very inviting. The water is cold but refreshing. Joy is a squeaky clean feeling after a day’s worth of body muck has been washed off. Now for a hot dinner.

I flip open a beer and take a well-deserved swig to celebrate the end of a long day. The stove comes out, ready for a roaring time cooking some noodles. And then it struck me.

I have forgotten to buy a ‘cassetto bombé’ (what the Japs call butane gas in a can). Small matter. I simply ride to town and get one before the 7/11 closes. I ride out into the night, with my bright Magicshine bathing the whole road white. 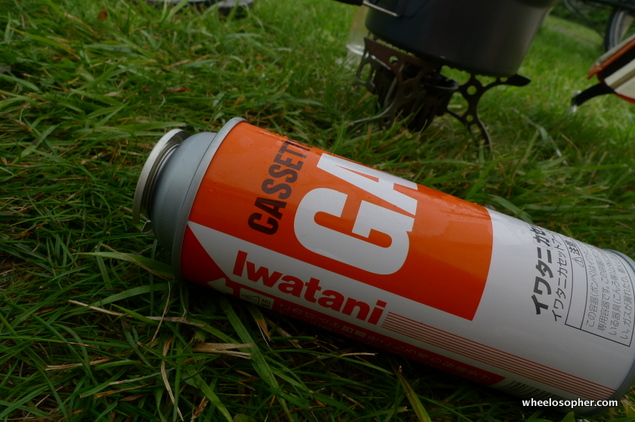 Cassetto Bombé! Every Japanese home has one of those compact cookers which use this type of butane gas. With an adapter, I’m able to use my multi-fuel stove with this instead. It’s cheap and available at every kombini.

I ride. And I ride. At some point, I know I have been going on for more than 2 kms, so I decide to turn back, thinking that I had ridden past it in my haste. Strangely, I see no signs of a 7/11, not even a switched-off signboard. I’m spooked. I refuse to to believe it, so I try again.

I just cannot find the 7/11, nor the Lawsons. And worse, all the shops are already closed by this time. But, no-dinner is not an option. I cruise by a touristy looking joint and went in to try my luck. No luck. Again, I was showed the Ultraman sign. ‘We’re closed’, boss-san says in Japanese. I gestured that I was hungry and needed food so I looked around and saw some cooked corn vacuum packed in plastic. That’ll do. I buy 2 and pay the astronomical price of 700Y for both.

Back at the campsite, I continue with my pathetic first-night dinner of left-over lunch bread, the rest of the by-now flat beer, and the sweet corn. I’m weary with the day’s travelling so I get ready for bed, choosing to thank the good Lord for bringing me here to this beautiful place instead.

Tomorrow will be a better day.