In all my years of travel, no other land has touched me more deeply than Tibet. And it’s easy to see why travellers are so enamoured of this part of the world. Few destinations can compare to the majestic snow-capped mountains, the cold Himalayan weather, the grasslands, the people, their religion, and the fiercely individualistic nature of their ethnicity, never mind the fact that China has always maintained that Tibet has always been part of China … and always will be.

Life is held in high regard here, as would be expected of a people who believe that in their next life, they could come back as an ant or, if the heavens should so ordain, a Dalai Lama. The chase for good karma is a never-ending one, and one can never accumulate too much of it. It also explains why serious crime is uncommon here.

My only regret is that I didn’t have more days to spend here. If I did, I would have travelled further inland and perhaps, try to wrangle my way into a Tibetan home to stay a night, preferably a nomadic family living out on the open grassland in a tent made of spun yak hair. I had seen one of these in Tagong, but it was on the other side of a long fence.

Tibetans are distinctly unique in the way they look, talk and dress, so people-watching is a great pastime here. But of all the Tibetans I have met, none was more captivating than the woman who manned the public toilet in Tagong’s town square. She would sit all day outside the WC (that’s ‘water closet’ to the uninitiated of this rather archaic term in the British lexicon), as proclaimed in big bold letters in red.

As I observed her (the toilet is not far from Snowland GH), she would move from her perch in the sun to the entrance of the toilet and back again. I gestured to her that I wanted to shoot her portrait but, as is usual with such situations, she made the universal sign for mullah, rubbing her thumb and forefinger at me. I obliged.

Her deeply tanned face was beautifully wrinkled with lines that told a thousand stories, and her rheumy eyes were a striking contrast to her well-cared for teeth, still intact and of good colour despite her years. Her face so struck me that I could only wonder at her life. In spite of her lowly occupation, she looked very dignified. 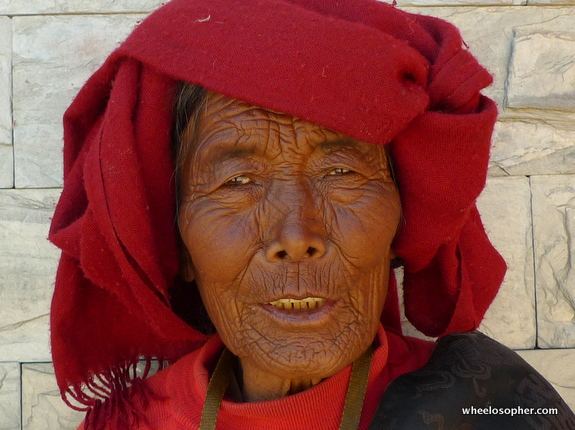 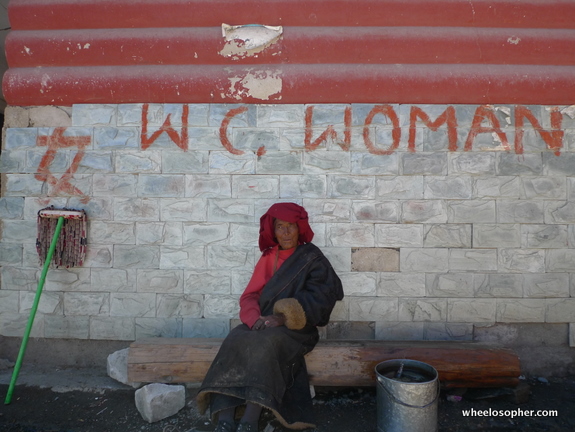 A great pun if ever there was one... 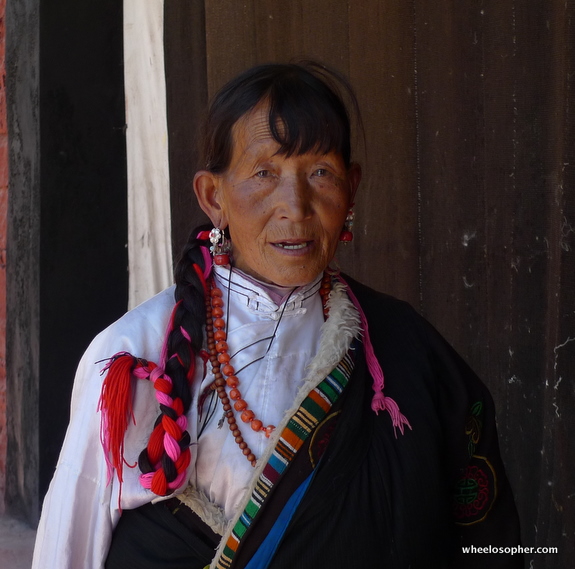 This was another beautiful specimen of a Tibetan woman that I came across in the monastery. Her clothes and demeanour seem to suggest a higher station in society. 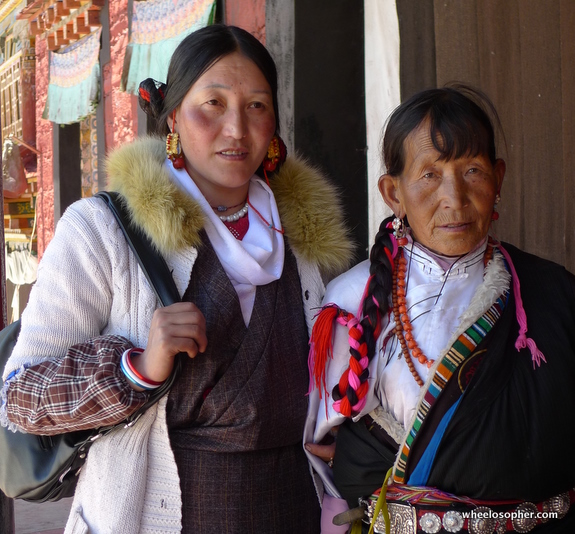 Here, she’s with her daughter who, going by what I saw in town, was clearly the most well-dressed woman around. 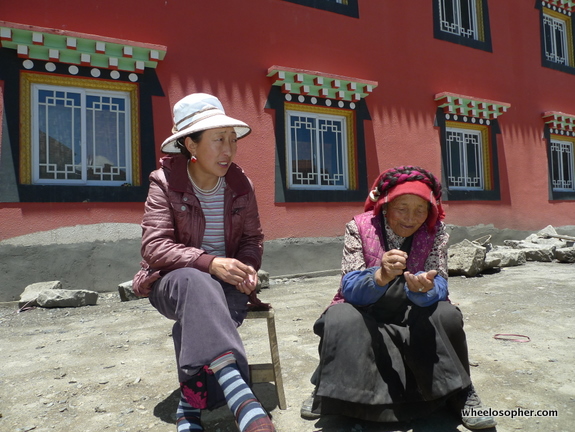 Never one to waste a good sunning opportunity, Sally Kham (left) and a friend warm themselves outside the GH. 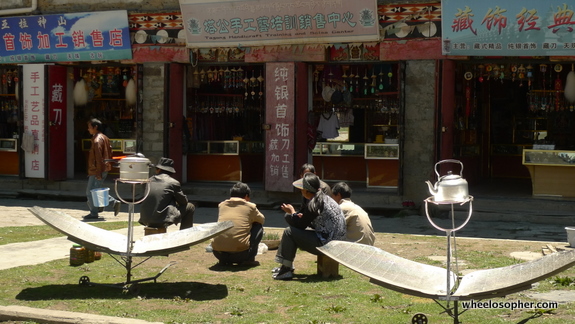 Might as well boil some water while we’re at it. These solar contraptions are quite amazing. 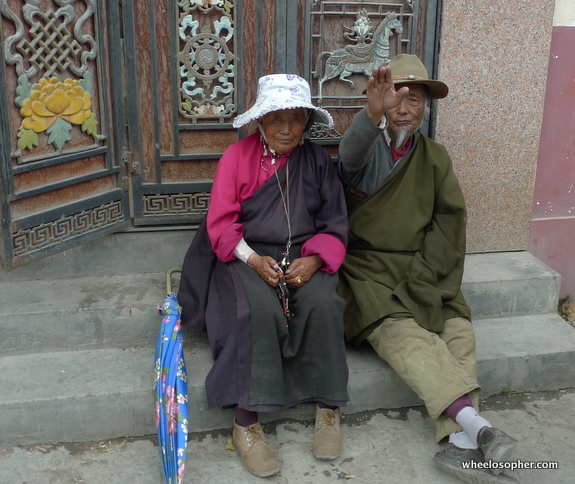 The old dude wasn’t waving a hello, he was telling me to sod off and not take their picture.  Some Tibetans are not particularly happy when a tourist points a camera at them, so sometimes I would do the next best thing — shoot from the hip while looking the other way. 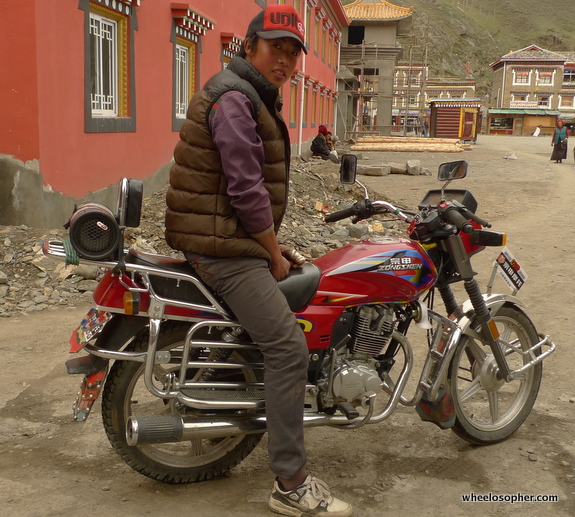 The new generation Tibetan. There was nothing traditional about him, including the round boom box behind the seat. They would ride around with music blaring at full blast, making a racket, and a nuisance of themselves. 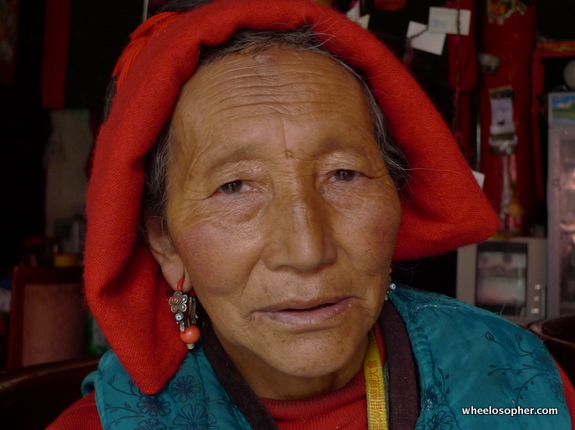 Laghang monastery was next on the list of things to see. Despite the 20Y entrance fee, it was worth it. The main courtyard was a little messy — they were carrying out some renovations, adding on more buildings to the complex. I climbed up the steps to the main hall and entered a totally different world. My objective was the main prayer hall, the inner sanctum of the monastery. Cameras, unfortunately, were only allowed into the smaller halls and not the main sanctuary where it was the most striking in its colours and experience. So, I’ll try to describe what I see …

As I pushed aside the curtain, I walked over the threshold and entered a kind of ante-chamber. Here, there were 3 devotees doing their Tibetan Buddhist thing. First, they would stretch their hands straight up above their head; then they would get down on their knees and stretch their bodies forward, prostrating themselves fully on the floor. Then they would raise themselves up to their knees again, in reverse, stand up, stretch their arms up in the air, and repeat the entire action — again and again and again, for Buddha knows for how many times.

As I tore myself away from this riveting spectacle, I stepped into the main sanctuary. I was immediately engulfed by warm air, laced with the unmistakeable scent of yak fat which was the main source of fuel for the hundreds of burning candles and oil lamps. The place was dimly lighted by the warm glow of these lamps. It was beautiful. I had never experienced anything like this, and it was quite surreal. All around were every imaginable likeness of figures of Tibetan Buddism, many of which were unrecoqnisable to me.

On the main altar, a huge figure of Buddha loomed over the hall, and here and there monks were about their duties. Something else captivated me as well — Yuan notes stuffed into nooks and crannies everywhere, not just the offering boxes. There was a small fortune here… multiply that by the days of the week, month and year and it could come up to a pretty penny. 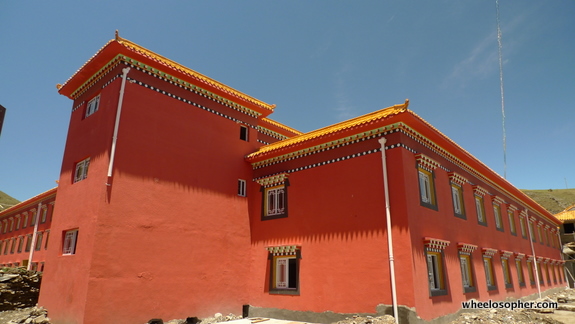 The exterior of Laghang monastery 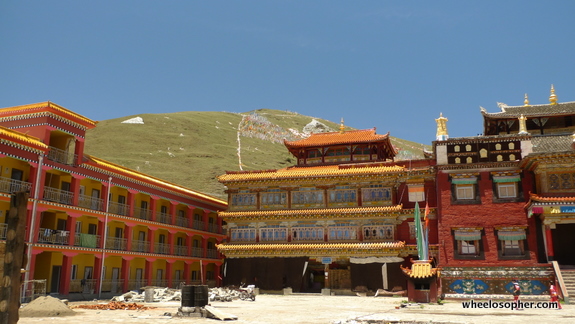 The main courtyard. The building on the left seems to be newly built. 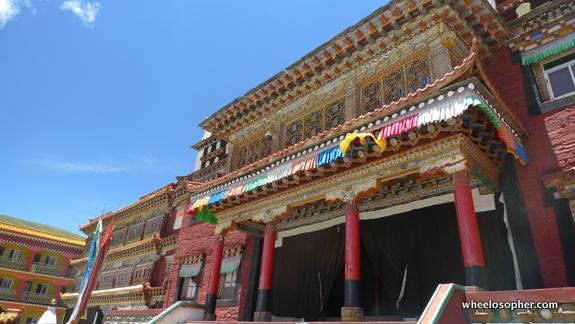 The main entrance to the main hall. Notice the black curtains.. 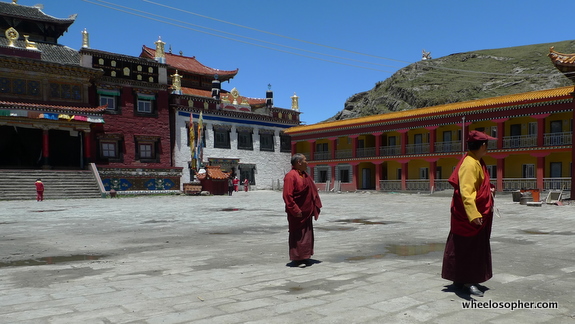 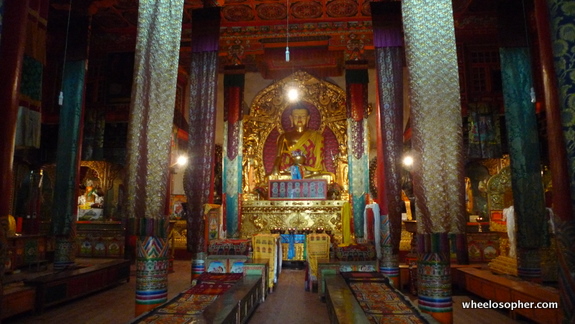 One of the smaller halls where cameras are allowed. The intricate designs and colours are mind-boggling. 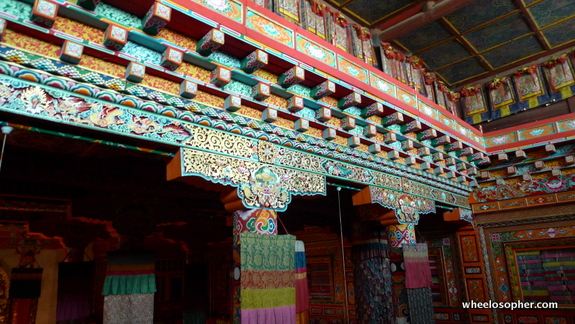 A lot of effort went into the buidling of this monastery. It’s overwhelming, to say the least. 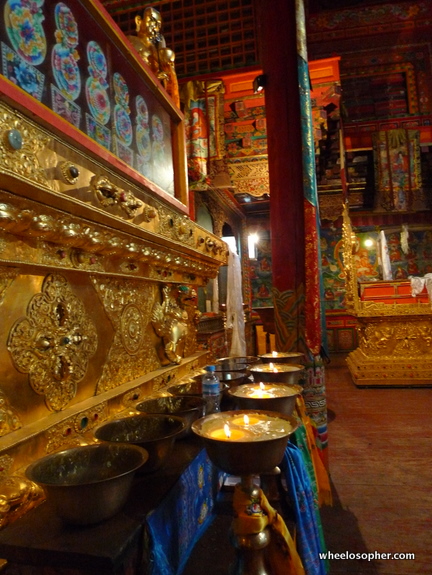 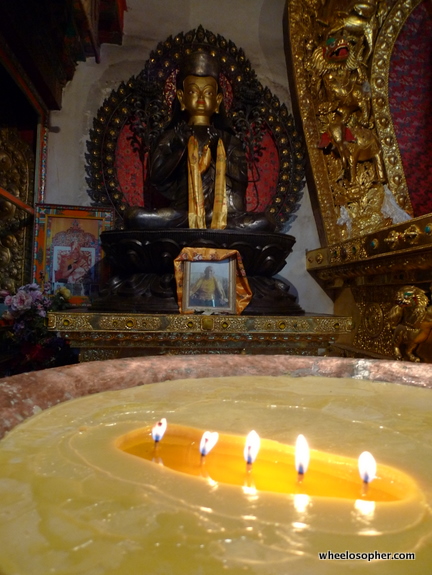 Truly, the yak is indispensable. No other type of fuel will do except yak fat. 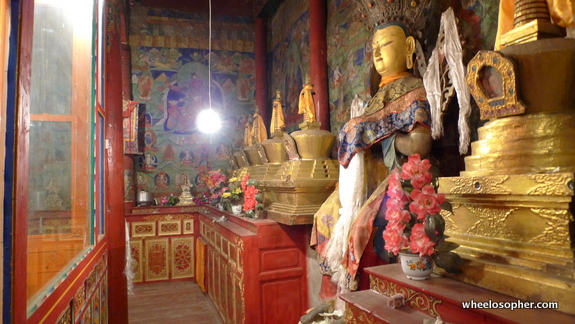 Look carefully and you can spot the Yuan notes stuffed here and there. 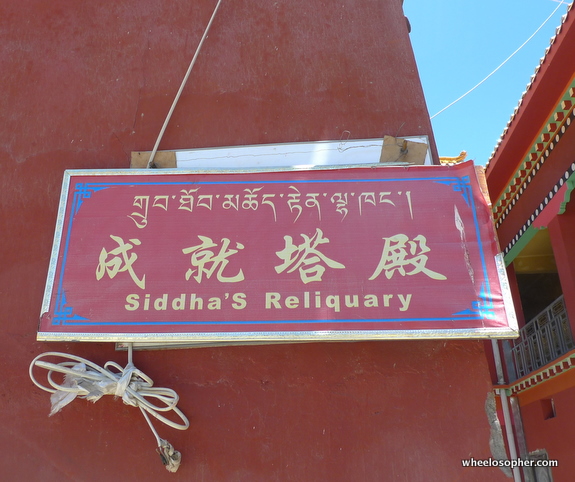 As I walked around exploring the monastery’s many outhouses, I was floored by this sign, or rather, the huge word on it. ‘Reliquary’, according to Mr Collins, is a ‘ receptacle or repository for relics, especially relics of saints’. Never thought I’d improve my vocabulary in a Tibetan monastery.

Tomorrow, I make my way to Luding, a very Chinese town straddling the banks of Daduhe. Of course, I won’t be riding all the way. There’s a massive 4,300m pass to to cross, which I’m told, is very, very cold, and this was from  from Sally’s mom. Hearing this, I did not hesitate to ask Sally about public transport to Kangding. Sally was an angel, promptly arranging a seat for me in a van going to Kangding the next day. Kangding is 97 kms away from Tagong, and 54 kms away from Luding, most of which will be downhill. Just the ticket, as there was no way I could keep to my schedule otherwise.