Mun Tau, Pao, Yie Tiaw, Shi Fun, Tau Jiang (plain dunpling, meat dumpling, crullers, rice congee and soya milk)… they would feature quite constantly in my diet. But what I really liked was the price – cheap, cheap, cheap. It made up for the lack of breakfast variety, I suppose. 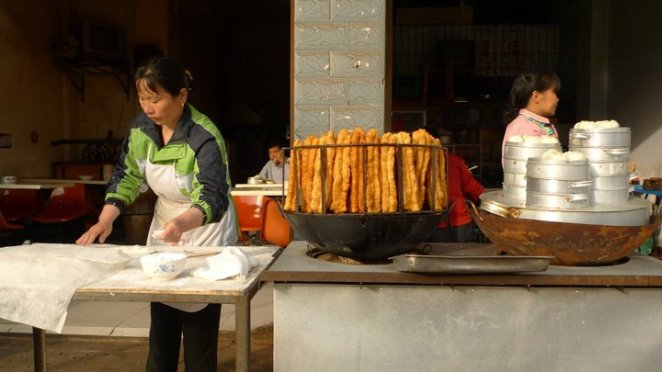 along with shi fun...congee, and pickles

I always make it a point to sit with the locals if possible. They're always good for an interesting conversation. This guy was no exception. The hotel is directly in the background. 7 Days is just a little behind to the right.

After breakfast (featuring all of the above), I headed out of Dujiangyan. The sky was cloudless, and the sun shone hot and bright. I couldn’t wait to hit the hills. About 10km out of the town, the road quieted down from the sparse traffic (most of it went through the expressway), and I started on the first of many climbs for the day.

The first of many dams that I would be passing

The first of many tunnels I would be riding through

I see a guy waving excitedly and taking a photo of me as I turn a corner. An admirer? His name is Michael Leonardo; from Shanghai en route to Lhasa on a solo bike tour, and he is mighty pleased to see me, or my bike pump* rather, after experiencing a puncture. Michael (call me Leonardo) suffered the same problem I had with his puny pump but my new 30Y pump made short work of filling his new tube.

* I’d just bought a new one prior to leaving Chengdu, as the one I’d brought had developed weak lungs and couldn’t seem to make it past 50psi; my Marathons demanded 80psi at least to be able to hum a nice tune on the tarmac.

Leonardo bade me ride with him as far as we were going on the same road until we parted ways, each to his day’s destination. Collecting brownie points seemed to be the order of the day as, a little later, we came upon a stalled 3-wheeler in a tunnel. The owner, an elderly man, was obviously having trouble pushing his vehicle to the end of the tunnel. Passing him by, I asked if he needed help and his face broke out in a huge sigh of relief. We rode quickly to the end of the tunnel and then ran back to the old man. He got inside to steer while we pushed him on his way. There was an ever-so-slight incline but we easily managed. Out of the tunnel, the old man was very thankful that providence had sent 2 timely rescuers to his aid. 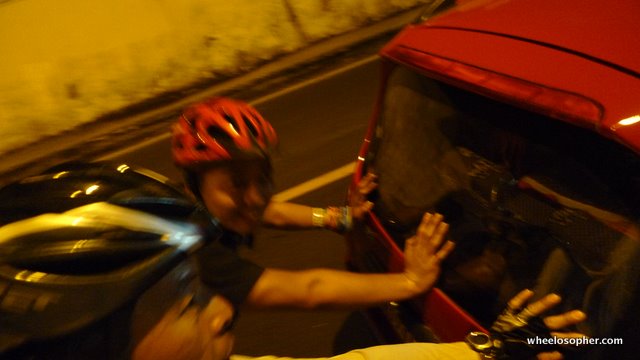 Fruits are cheap and plentiful. We stopped a fuit vendor in a van and gorged on watermelon and fresh plums. Perfect for blazing hot days like today

Chalking up 2 good deeds in one day sure felt good so lunch was in order. At Yingziu, the epicentre of the 2008 earthquake, Leonardo repaid the pump favour with a huge lunch, one which, hungry as we were, we couldn’t managed to finish. I wondered if it was the shop owner who fleeced us with bigger-than-necessary portions of food, or was it Leonardo in typical generous-Chinese-host mode, making sure that I was not wanting for food. 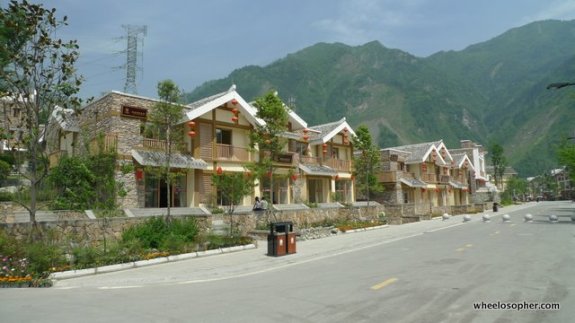 The old Yingziu was totally wiped out. Every house here is spanking new 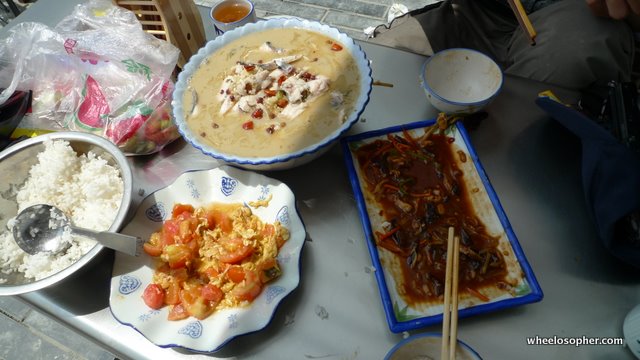 After lunch, we parted ways. Leonardo to Wen Chuan directly north, and me to Gengda, directly west. The road to Gengda almost immediately deteriorated into broken gravel and loose dirt. This was to continue for 20 kms, but it did make up for it with some very stunning views of the gorges. Remnants of the earthquake could still be seen here and there – houses rooted up and hung at precarious angles, and the sides of the gorges raw and broken where tectonic plates rubbed each other into submission. It’s a very depressing sight. 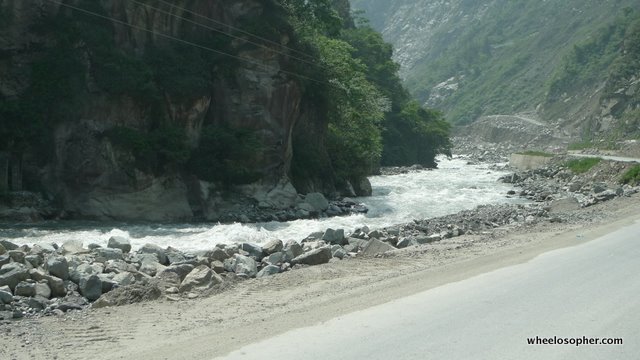 Riding into earthquake territory. It started out nice and smooth. 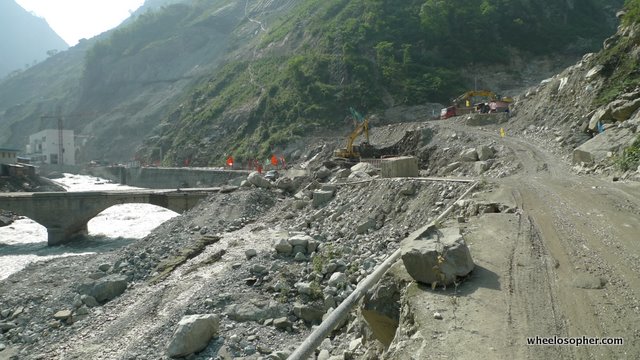 and then it got rougher.. 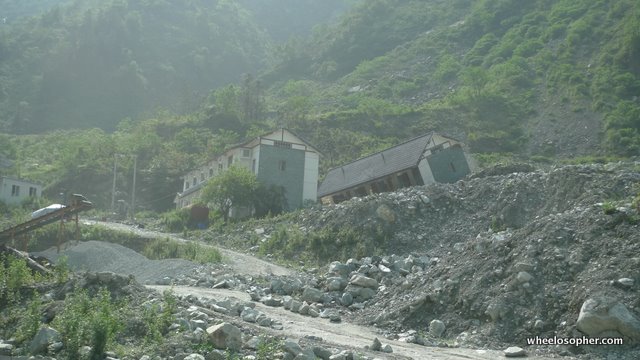 But it was still beautiful country 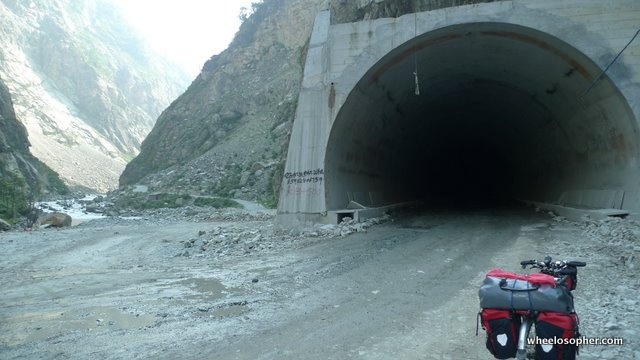 At one point, I rode through a longish tunnel that was unlit, wet, muddy, potholed and cold. My 900-lumen Magicshine light helped immensely in lighting up the dingy bowels of this tunnel. Everything is doubly amplified in a tunnel, especially the sound of heavy vehicles. A bright rear light is an essential piece of equipment when riding in these tunnels.

Finally, I climbed one last long incline and came into the small town of Gengda. As I passed a decent-looking building with a restaurant downstairs, a man in rubber boots called out to me. And another round of ‘Do you have a room, how much, let’s have a look first’ conversation took place and pretty soon I was carrying my stuff into the room.

It was 30Y for a room, with attached bath, hot water and all. It was getting cheaper as I rode further out. But when I asked for the room key, the lady boss who checked me in said there was none but not to worry, it’s very safe. Oh well….It didn’t really bother me, as I wasn’t going anywhere after dinner in this nothing-town.

It was cold that night, but the thick, heavy quilts which are used in all these hotels are very efficient in keeping one warm. Complemented by the electric blanket, you’d be warm as toast. Actually, I’ll never understand why they call it ‘electric blanket’ when it’s laid underneath the bedsheet and not on top of the sleeper. 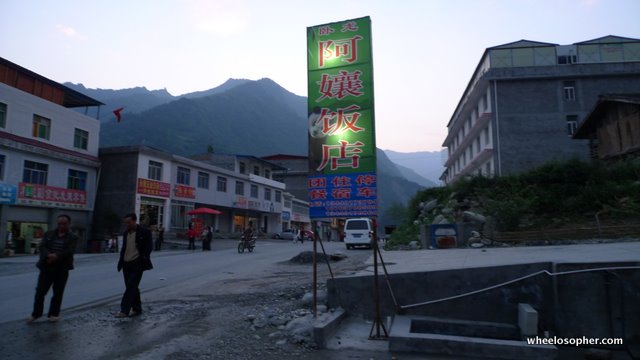 Gengda Jiu Tien or whatever the Chinese name is.

Next, riding in panda country.

One thought on “Sichuan Tour. Day 3, May 16. Dujiangyan to Gengda”