First it was Shang who had gotten wind of my Mae Hong Son trip. He asked if he could join me and of course, I said ok. (Except for my debut tour, I’d always toured alone, and I thought it might be nice to have a buddy along this time around.) So he promptly went and ordered a brand new Surly … with a pair of Ortlieb panniers and a handlebar bag to match.

So far so good. 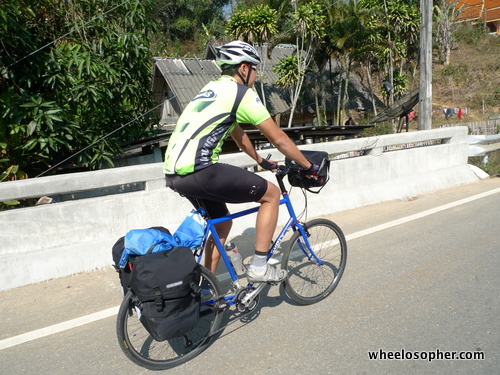 6-foot tall Shang Leong aka Da Man, Princess and other unmentionable names. At the end of the trip, we decided that he was going to be stripped of his 'Da Man' title to Roland 'Robot' Cheah, and be just 'Princess'. The story will unfold ...

Then Terence, who heard about the impending tour from Shang, decided that for his birthday, (and before more and more candles were being blown out) he was going to reward himself with an adventure on 2 wheels … well, I suppose debut tours are always an adventure. I’d also heard talk about a very sweet, hand-built-in-the-US, titanium Lynskey frame that he was getting for his … err…’some-decades’ birthday… but that’s another story.

Terence aka Pump on his soon-to-be cannibalised Kona

Then it was the Chinese New Year holidays and together with my family, we made our yearly pilgrimage back to the island of Penang. Whilst there, my good friend Philip told me over dinner that a friend had lent him a bike to use as he wished because the friend had bought a newer one. Philip wasn’t much of a biking aficionado and wasn’t quite sure what bike it was when I asked him about it. He said it had a name like Santa something …

Well, since it was already turning out to be a group ride, I thought why not get him to join us? After all, my friend was sorely in need of a holiday. He’d always been selflessly working and working, and serving in church, without giving much thought about going for a holiday, let alone a cycling adventure like this.

Philip's Santa Cruz hardtail. A tad small in size but big on components -- Chris King hubs, Magura brakes, XTR drivetrain, Mavic rims and an unnecessary bomber of a Bomber fork. The chain stays are square, heavyset and bombproof too, as is the stubby downhill CNC handlebar stem. There were also no eyelets for attaching a rear rack so we had to DIY a simple clamp on each of the seat-stays. Not the best for touring but at least there's no worry of braking inefficiency , no matter how steep and sharp the switchbacks are going to be 🙂

Mimi, the wife, must have sensed the opportunity to get Philip to finally take off somewhere and cleverly pointed out that since I, the experienced cycle tourer, would be leading this ride, why don’t he join me and have some fun? After all, it would only be a short trip.

Later that night, after they got home, a return flight to Chiang Mai was booked for one Philip Chuah, the fit but newbie biker and tourer, who would be attempting to ride the infamous Mae Hong Son route, no less. I wondered then if it had been such a good idea.

Then Roland (who had earlier showed interest in joining us but backed out later due to work) called from KL and said that he was now good to go. ‘Great,’ I said, and following which, my famous question — ‘but err.. have you booked your flight yet? No ticket, no talk ah’.

He got it done immediately and reported back to tell me so. 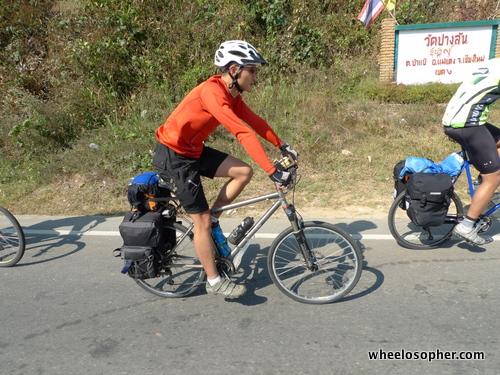 The ever-smiling Roland aka Robot, a strong and super efficient biker. Rumour has it that massage aunties pay to massage him... ripped and six-pack endowed that he is.

One week before we left, Shang called me and asked if it was ok if Mo, another member from our group of mountain bikers (which goes by the unabashedly loud name of Thunder Clan) could join us as well. I said please, by all means, the more the merrier. Surely, this was turning out to be no ordinary group outing. Mo then promptly went out and borrowed a hardtail from the LBS (he only had one bike — a full-sus) and also bought a brand new set of Topeak panniers, rack and handlebar bag.

Mohammad Sarhangi aka Mo, the Iranian Norwegian. Spicy foods were the bane of his existence ... until he experienced a culinary epiphany halfway through a steamed fish at Pai.

Ok, so now it’s 6 tourers. I decided that 6 was nice round number and as it was only a week before the ride, we’d keep it at that. This itch was becoming as uncontrollable as eczema.

It was time to start packing and prepping the bike.