Amsterdam is a city that’s worth exploring for a few days, but I didn’t have a few days. By the looks of it, I could only enjoy the city for a day and I’d have to get a move on if I was to keep my schedule. I’d realized that the itinerary I had so cleverly planned was actually more feasible if done over at least 5 weeks… or better still, 2months. 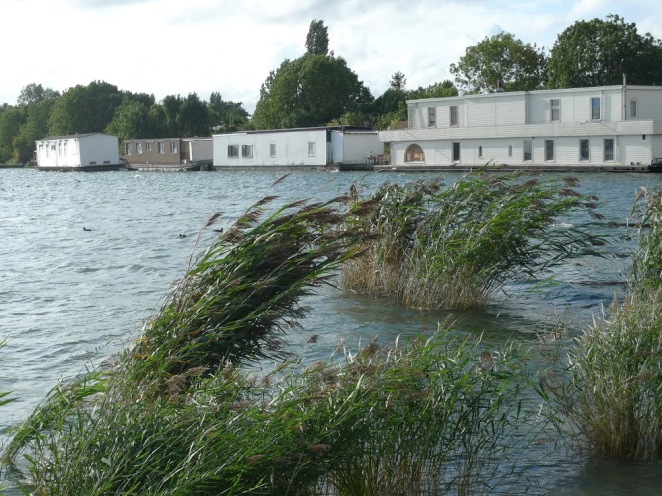 The sun was shining bright and early, but the wind was gusty and cold

To Delft it was then. I was looking forward to it, too, as I would be staying with Martha’s friend from my hometown – Bee Suan, and her German husband Sebastian. Martha had so kindly arranged this special stop for me and it meant a nice break from camping as well.

The day before, I had asked and, according to the guy in the campsite’s bikeshop as an indication, Den Haag (or The Hague in English, which was very near to Delft) was only was about 50km or so from Amsterdam.

50kms or so sounded like a ride in the park, especially with the weather forecast to be sunny (the weather forecasts here are very accurate). This morning, after packing up, I realised my rear tyre needed a little more air but I had already packed the pump and it was too inconvenient to dig through the pannier, so I headed for the bikeshop again.

It was another guy who was manning the counter and as I asked to borrow the pump, I told him about my plan for the day and asked him what the best route was to get to Delft.

He was a nice friendly guy (all the Dutch people I met seem to be friendly) and suggested I follow the scenic Amstel river route for part of the way. He even showed me the best way out of the city. well, it was … for about 3kms anyway.

As is typical of Dutch fietstraats, or cycling paths, they were all numbered and all you had to do was simply follow the direction to the number coming up next on your planned route…. if you had a cycling map, that is. I didn’t have any, as I just couldn’t find a shop which sold one.

But soon, an elderly gentleman came up to me and asked if I needed help (tip: if you acted forlorn and lost long enough, somebody will eventually come and help you).

Ok, bye-bye, thank you very much and off I went. Naturally, by the time I reached the first turn after the canal, I was lost again. It never crossed their Dutch minds that a Malaysian from some tropical country which had no cycle paths would be able to remember their ‘easy’ directions. 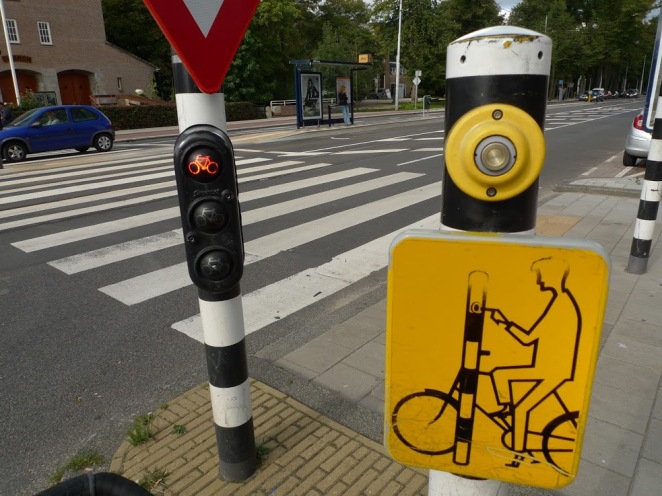 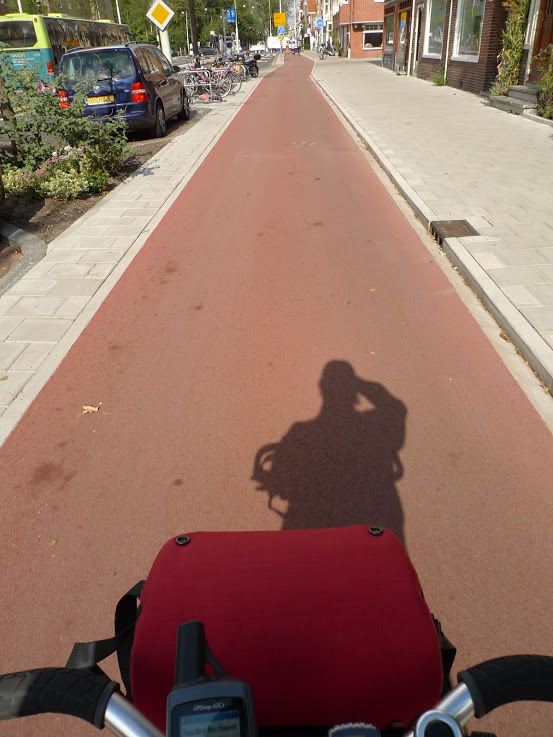 Dutch cycle paths are some of the best in the world

Bike parking at a train station. Count them..

When I finally got out of the messy roads leading out of the city, I suddenly found myself on the Ouderkerk on the Amstel route. As amazing as the fact that I actually found it, the change in scenery was what made me gasp with surprise. It was beautiful, and it made getting lost so worth it.

As I wound my way along the Amstel, it became one of those moments that only a cycle tourer can explain — the sheer delight at the spectacle that kept unfolding with every pedal stroke; always surprising, taking your breath away every now and then and, as a bonus, clear blue skies and the wind behind your back — this was what we lived for as a cyclo-tourist.

The Ouderkerk on the Amstel route, very scenic and very popular with recreational cyclists

The route was so nice, I just had to stop and drink it all in …along with a cup of coffee al fresco

Soon, the Amstel and I had to part ways and I was back to treasure hunting. But, I wasn’t worried at all. You see, instead of a cycling map which I couldn’t find, I had gotten myself a driving map. This gave me an idea of where I was at all times, and in the Netherlands, civilization is never more than 20 minutes away.

So, all I had to do was adopt a different strategy – when asking for help, tell them my final destination, then whip out my roadmap and ask them which was the next nearest town I should head for … and so on and so on.

2 friendly ladies who helped me with directions

This particular spot was so captivating that I just had to stop and soak it all in. I had my lunch break here as well, but sitting still meant being exposed to the cold wind so after a while I hit the road with the wind behind me once again. 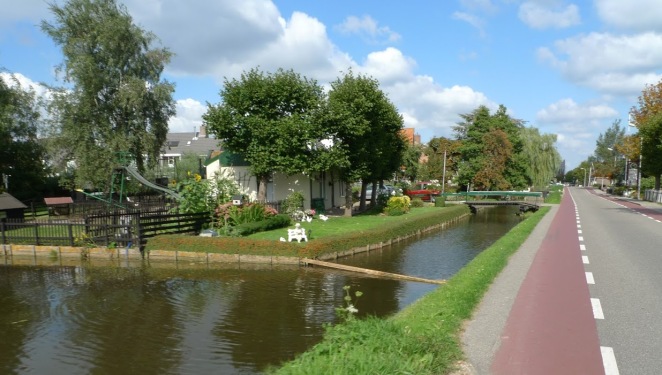 You couldn’t ask for better, or safer, roads to cycle on in Netherlands. The red sections are strictly for bicycles. Cars passing by would always be civil and careful. Such is the culture in Netherlands.

Whenever you see the sign ‘Te Koop’, it meant ‘for sale’, In this case, fruits and vegetables from an unmanned roadside stall. This particular unmanned one, like many in Europe, operated on an honesty principle.

You can even park a big boat in your backyard

At one junction, I asked for directions from a helpful Volvo showroom salesperson. He even let park inside when I asked to use the toilet..even offered me a drink. So nice 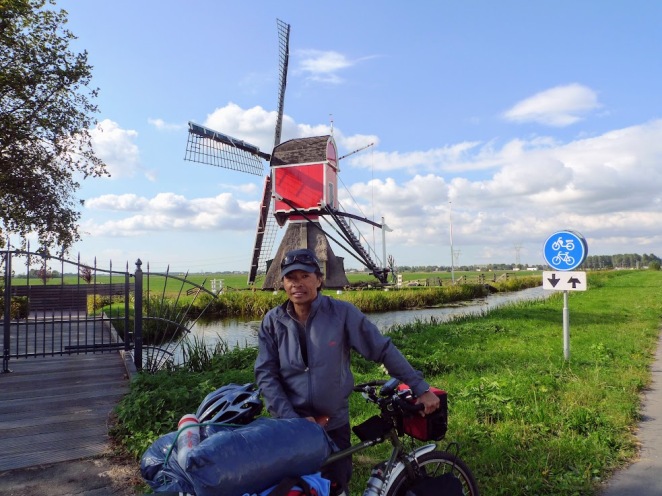 A fully-working windmill and home to some farmer

It worked like a dream. Trouble was, I was now only halfway through and the trip-meter had only clocked about 50kms. Oh well… onwards to Delft. I had confidently told Bee Suan that I should arrive by lunchtime but now if I was lucky, it’d be dinnertime instead.

I was right. Rolling into Delft, I located her waypoint on my Garmin (that was all I had) and rode towards her home. I had gotten her GPS coordinates by pinpointing her address on Googlemap and then, by clicking on ‘get directions’ it would display part of the results in coordinates. I would then copy those coordinates and created a waypoint in Mapsource, then upload it to the GPS unit. Pretty neat, Googlemap is, and very, very accurate.

Arriving at the town square of Delft. The town’s church is just behind me. 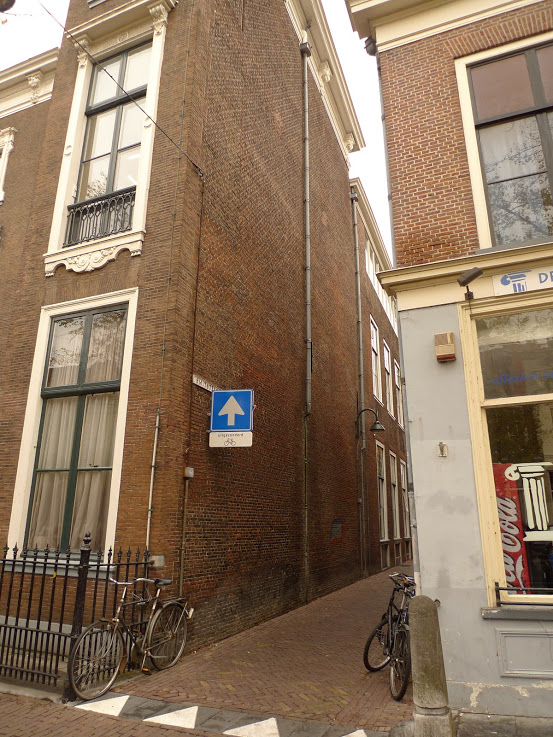 And so at around 6.30pm, I rolled into a very narrow street called Smitsteeg…

The hunt was over for today and I was looking forward to a dinner of Hungarian Goulash that Bee Suan had told me she was preparing for dinner. Paired with a bottle of excellent Spanish red and the company of my gracious hosts, what better way than this to end a day of hard riding?