What a Giro finale! I still can’t believe Dennis Menchov won — and that after falling off his bike at the very last few hundred metres of the final time trial of the tour!

As the final day of the tour,  it had all the makings of a classic duel (a 14 km individual time trial in the heart of Rome,  and in the shadow of the Coliseum, no less) — seemingly, 2 gladiators duking it out to the finish —  Menchov a mere 20 seconds ahead of 2nd place Danilo Diluca in the General Classification. The race was being telecast live on the EuroSport channel.

Diluca was 2nd last to roll off the ramp, and he had chosen to go with a normal road bike, given the condition and nature of the course — 4-5 tight corners plus a few cobbled sections … but worse of all, it had started to drizzle again. 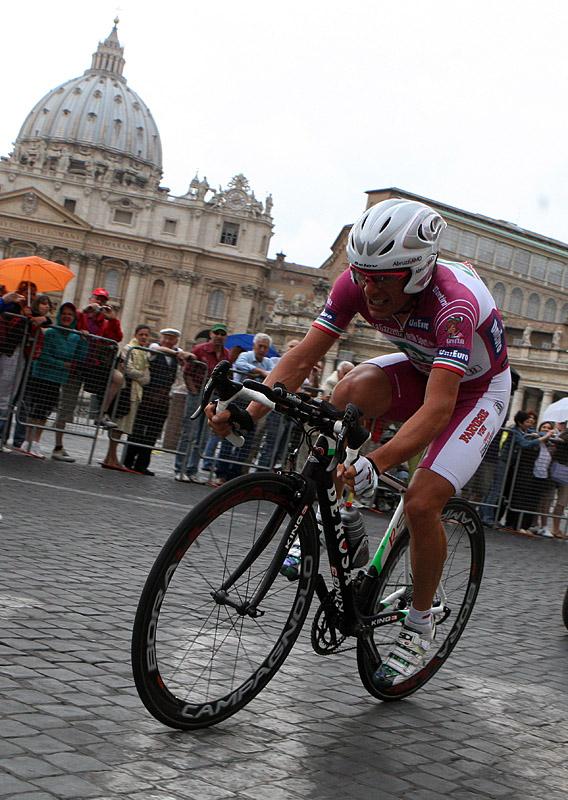 Danilo Diluca, 20 seconds down to Menchov at the start of the TT. As a better bike handler but lesser TT rider than Menchov, he chose a road instead to better negotiate the tight and wet corners.

Diluca started strongly, even chalking up the fastest time of the day at the first checkpoint. Then Menchov, opting for a TT bike was the last to go, and then the first shocker — Diluca was 5 seconds ahead when Menchov rode past the 1st checkpoint!

But Menchov, ever the cool, calculating rider, was pushing a much bigger gear. True enough, at the halfway 12 km checkpoint, Menchov was not only pulling out all the stops, he had upped the ante by taking 14 seconds from Diluca!

Diluca finished as 6th fastest for the day, and all attention shifted then to Menchov. 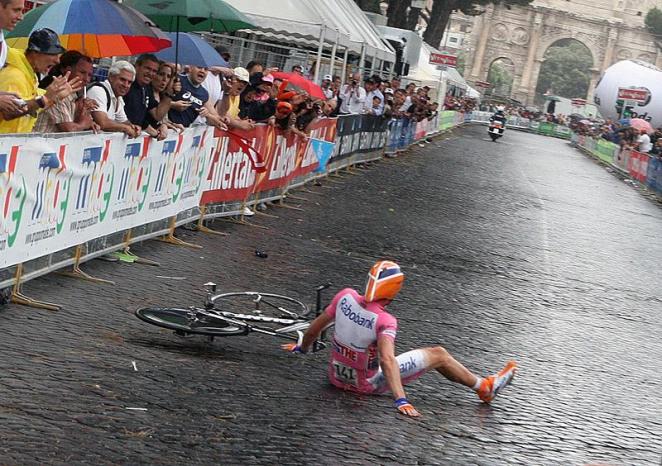 Menchov testing his butt against the cobblestones

Less than a kilometre to the finish line, (the commentator was already congratulating Menchov) and before you knew it, Menchov crashed on the wet road! And it wasn’t even a corner, just cobblestones, although it must have been treacherous when wet. Check out the video of the crash as seen from the helicopter following the race. The mechanic should be rewarded for the fastest bike change ever in a race:

On-ground and close-up video of the crash:

Hey, come back! Menchov picks himself up within seconds and goes after his bike. 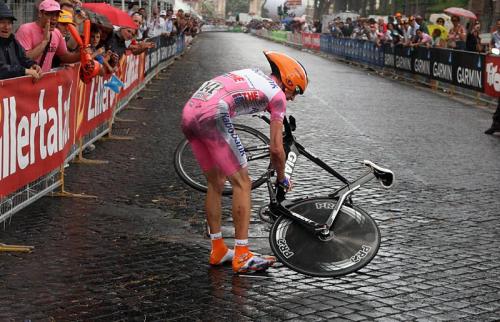 There, there...are you alright? Seconds later, he would chuck this bike unceremoniously by the side of the road when his mechanic came to his side with his replacement bike.

The whole neighbourhood must have heard me shouting in disbelief at that heart-stopping moment. But what was even more amazing was that when Menchov picked himself up, the team car that was following him had his spare bike out in a matter of seconds. He got on his bike, started off a little wobbly and ….  rode off to the finish line, still a winner by 41 seconds on Diluca! Unbelievable!

How would you react if you were one Menchov’s team mates watching the race in anticipation of victory? See the team’s  reactions here when the crash happened:

What a finale. Menchov, understandably, was very elated at his win, punching the air and whooping victoriously. As I said, what could have been a more fitting venue for such a duel than by the ruins of the Roman Coliseum?

Yea! Go to Rabobank for your loans! Yea!

Well, the Giro has ended … and my favourite team took home the Maglia Rosa (that’s the Pink Jersey of the winner, for the less informed :). Come to think of it, the race is Italian, the winner is a Russian sponsored by a Dutch bank, and powered by a made-in-Taiwan Giant bike. How cool is that?

Now, let’s see if some of that Giro magic will rub off on my Giant and I … in about 3 weeks time.